‘Passing Glances’ on Widmer Street at Adelaide, was the most personal of murals.  It celebrated those who lived in the neighbourhood in the 1980’s and 90’s.  Some are still with us, others have passed on.  This work is almost extinct.  As Joni Mitchell sings in Big Yellow Taxi . . .
“Don’t it always seem to go
That you don’t know what you’ve got
‘Til it’s gone” 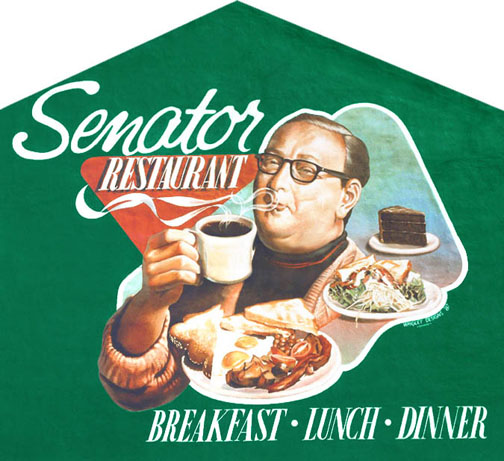 Another BILL WRIGLEY mural can be found on the south side of the Senator Restaurant, Victoria Street, just south of Yonge/Dundas Square> It’s in good shape.  Bill has specialized in professional mural painting for over 25 years and is recognized in Canada as a leading artist in the field. He has earned commissions from as far away as Japan and Mexico, across Canada and in the United States.  Website – http://www.billwrigley.com/