Former streetcar operator, ROY WHITE: “I worked for the TTC from 1966 to 1974, including in a supervisory role on the St Clair street car line. I remember those days with great affection, working from the Wychwood car barns, I particularly remember coping with the snow storms which, in retrospect, were great fun, possibly less so at the time than my memory tells me. I had many an exchange of pleasantries with an irate passenger standing in a foot or two of snow. I have lived in England since 1974, returning on holiday a few times.”

“I loved my time in Toronto, and believe you were very wise to retain the trams when everyone else including England was getting rid of them. This wisdom has been proved by the fact that trams have returned to the streets of LONDON, NOTTINGHAM, SHEFFIELD and other cities in the UK.  I have no knowledge of Mr Ford apart from limited reading online, but he is wrong about streetcars, which incidentally I do not remember in my time in Toronto being referred to as “trams”. 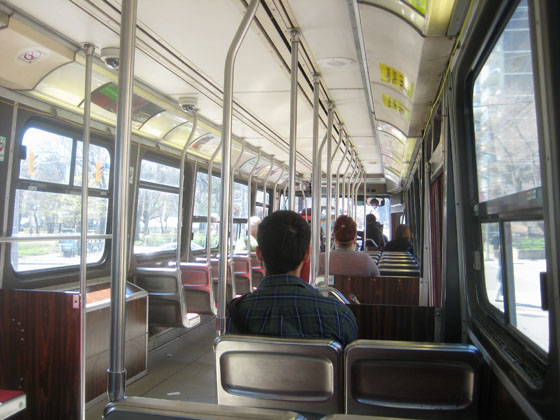 It seems that Mayor Rob Ford and spokesbrother, Councillor Doug, have a hate-on for the St. Clair streetcar transitway.  Mayor Ford to City Council: “People hate the St. Clair.  They hate these streetcars.  They don’t want these damned streetcars blocking up our city.  You look at it, it’s a complete disaster.  It went over budget. Go out there and drive. People know, it’s a nightmare.”  Not true!  Having ridden the system twice in the last couple of days, and driven it several times, I’d say the transitway works extremely well – from skyscraper-rich Yonge Street to less dense neighbourhoods further west.  City Councillor Joe Mihevc to the TTC Commission:  “Often when the political spinning starts, the first casualty is the truth.  We need to find a way to get beyond the anecdotes.”

The streetcars and platforms are clean and graffiti-free; each has a bench; most have colourful graphics and plantings; some have capsule histories of the neighbourhood; streetcars arrive every 5-7 minutes; U-turns are permitted; there’s on-street parking in commercial areas; motorists seem to obey traffic signs and lights; no honking, etc.  What’s not to like?

There appears to be far less traffic – both pedestrian and automobile – on St. Clair Avenue than you’ll find on most downtown streets.  Danforth Avenue for instance, is jammed with pedestrians and cars, even with a subway underneath.  Take a ride on the 512, and see for yourself.  Maybe the Mayor could focus his attention elsewhere – just a thought.