We’re so busy watching Trump that we sometimes ignore what’s going on behind our backs in this province and our city. The Green Party of Ontario has been watching however, and says Premier DOUG FORD’s destruction of the planet “is off the charts.” 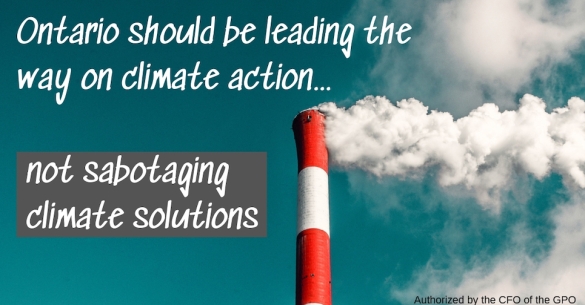 In just one week FORD has – 1) appointed a climate-change denier to a high-ranking electricity position; 2) closed the office of the independent environmental watchdog; 3) cancelled all electricity conservation measures beyond 2020; 4) announced a multi-million dollar, taxpayer subsidized television ad campaign to fight federally-enforced carbon pricing.  He’s also cut funding for much-needed supervised drug-use sites, in the middle of a crisis.

CANADA is warming up faster than the rest of the world, according to a report commissioned by the Canadian Environment and Climate Change Department. On average, the report says Canada’s climate has been, and will continue, to heat up at double the rate of global warming.Melting Canada will have serious repercussions for the entire planet. Think of future generations and the calamity they’ll inherit. DOUG FORD will be long-gone by then.

<“How To Build An Ark”, project leadership for the 21st century, by Martin Crump & Matthew Theobold. It’s available on Amazon>