No doubt about it. They are beauties. But the new Thomas Heatherwick-designed buses cost a fortune and will now be discontinued. The first 600 vehicles purchased in 2012 by (former mayor) Boris Johnson cost £354,000 each, while the next 200 in 2014 cost £325,000 each.  London’s new mayor Sadiq Khan first suggested his plan to discontinue the buses during his own election campaign, as a cost-saving measure to help pay for a four-year freeze on fares.

Her Majesty greeted Prime Minister Trudeau today by saying it’s “nice to see you again… but under different circumstances.” . . . . .  “I will say, you were much taller than me the last time we met,” Trudeau told the Queen, 40 years after being introduced by his father, Pierre Elliot Trudeau, as a 3 year-old.
“Well, this is extraordinary to think of, isn’t it,” the Queen replied with a laugh. 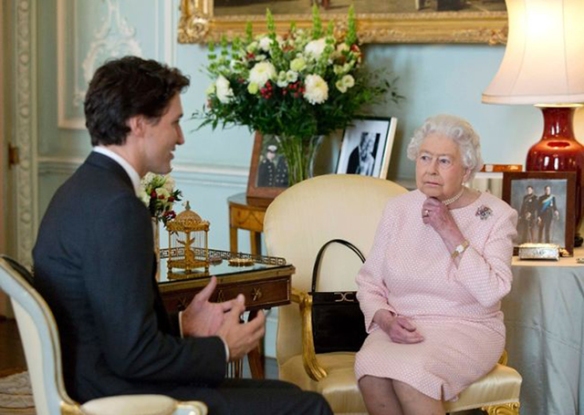 In 1978, the Queen was leaving Canada and a military band was playing, so 3-year-old Sacha and 5-year-old Justin (on the right below) marched back and forth while their father, Prime Minister Pierre Trudeau, walked to his plane.  <PHOTO – Toronto Star>

Says VOGUE – “sexy, feminist, and capable of balancing a baby on one hand: Prime Minister Justin Trudeau gets our vote.” <PHOTO – Justin Trudeau in the Library of Parliament, Ottawa, Jonathan Becker/VOGUE Magazine>

Working with Disney, famed British artist DAMIEN HIRST uses his signature dot painting style to represent the most famous mouse in all the world.  The portrait, titled “Mickey”, was auctioned for an inner-city children’s charity by Christie’s London on February 13.

What better time – Gay Pride Weekend – to hang up a painting of Charles-Geneviève-Louis-Auguste-André-Timothée d’Éon de Beaumont.  We can’t say whether or not he was gay, but the Chevalier d’Eon certainly enjoyed dressing up in women’s clothing.  The chevalier had quite a career – French diplomat, spy, soldier and Freemason.  His first 49 years were spent as a man, the last 33 years as a woman. Upon death, a council of physicians discovered that d’Éon’s body was anatomically male.  This 18th century painting was sold in New York to a British gallery as a “woman in a feathered hat”.  Not so.  It turned out to be our chevalier, the earliest known painting of a transvestite.  The portrait now hangs in the British National Portraits Gallery, just off Trafalgar Square.

LONDON is all spit and polish these days.  But in the East End, muralists and street artists still ply their trade.  As in TORONTO’s Rush Lane and Ossington neighbourhoods, their work is both stylish and spectacular.