To really know TORONTO, take a stroll or bike ride through its laneways.  There’s a vast network of them downtown and, by choosing the right one, you can learn a great deal about the city’s history. 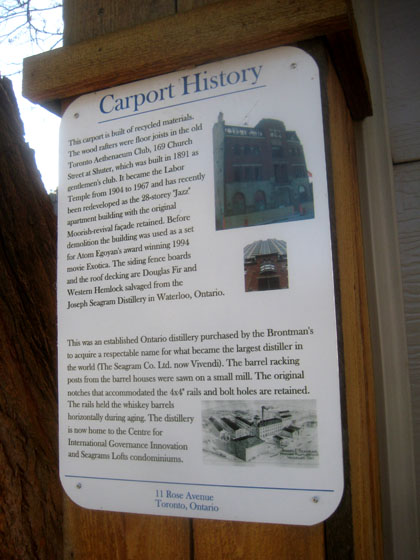 A simple carport on Flos Williams Lane, which runs behind Parliament Street.  It has a past.  The sign above reads “this carport is built of recycled materials.  The wood rafters were floor joists in the old Toronto Aethenium Club, 169 Church Street at Shuter, which was built in 1891 as a gentlemen’s club.  It became the Labour Temple from 1904 to 1967, and has recently been redeveloped as the 28 storey ‘Jazz’ condominium building”  The sign – created by the carport’s owner – goes on to say that the siding, fence and roof decking are Douglas Fir and Hemlock, and were salvaged from the Joseph Seagram Distillery <BELOW> in Waterloo, Ontario. 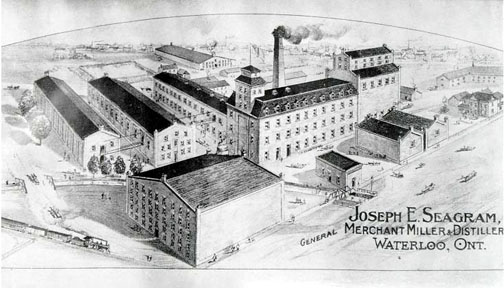 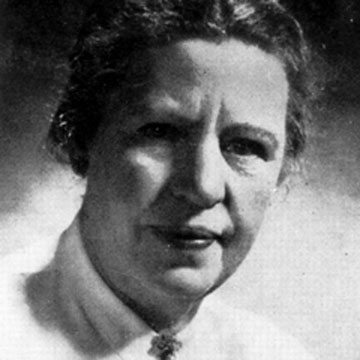 As for FLOS WILLIAMS, she was born and raised in Cabbagetown, wrote three novels and numerous short stories, moved out west and became one of Western Canada’s strongest women writers.  Her novels dramatized the experiences of immigrants building new lives in the harsh Canadian rural environment.