CJRT-FM has been on the air since November 1, 1949 as Canada’s first educational radio station on the FM band. The commercial-free station was part of Ryerson’s School of Broadcasting and Electronics, with input from the University of TORONTO, the Ontario Department of Education and some boards of education. Needless to say, the ratings weren’t sky-high. 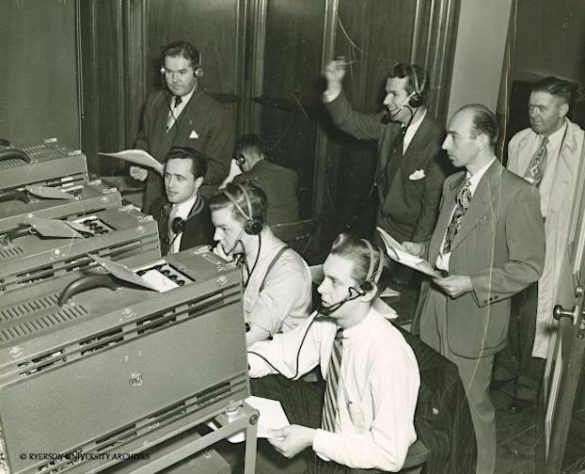 In the 1960’s Radio and Television Arts students were required to produce and broadcast live programming for CJRT. This included writing and producing half-hour radio dramas, complete with sound effects and music. I know about this because I had to do one myself. Plenty of sweat was involved. <CJRT control room photos are from Ryerson University’s Archive>

Making a long story short – in the 1990’s, along came Mike Harris and his Progressive Conservative provincial government. He cancelled funding for CJRT-FM.  Suddenly, the station had to fend for itself, and that’s when independent JAZZ-FM91 was really born.

These days the station promotes live concerts, is funded largely by donations, and reaches a wider audience than ever. In a way, Mike Harris did ‘the little station that could’ a real favour.