Development is underway, around the corner from Ryerson University, on a full block of Yonge Street from Gerrard East to Gould. This block and its sketchy past may soon have a bright future.

An 85-storey streamlined condo tower will take the place of a pizza house, the Made in China restaurant, Cellar Tech, the Rio theatre, Remington’s male strip joint and a collection of other small businesses.

The tower – YSL (Yonge Street Living) residences will be in one of the tallest buildings in the city. Living space will be mixed with retail and office space, designed for Cresford Developments by New York’s Kohn Pedersen Fox.

Several historic storefronts along Yonge Street will remain, as well as the former home of the Evergreen Yonge Street Mission. <PHOTO – The Varsity>

The S. Williams Block (above) at 363-365 Yonge will be reconstructed with new materials to match the existing facade. 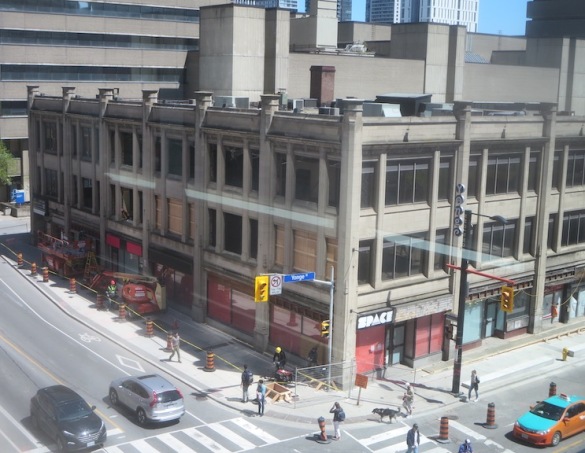 Plans are to keep the stone Gerrard Building, which at one time housed Child’s Restaurant downstairs and CBC television offices upstairs.

ABOVE – another remnant of the past – the RIO Cinema, which specialized in triple bills and untoward activities.

It’s a neighbourhood that seldom sleeps.  And now this significant part of the downtown strip, is on the way to reinventing itself.