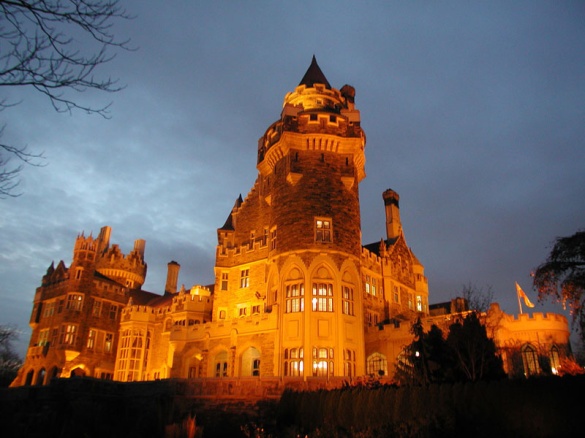 Among the amenities – 98 rooms, an electric elevator, a massive oven, a central vacuum, two secret passages, stables, three bowling alleys, a swimming pool and shooting range (both unfinished), a telephone in almost every room – and an estimated 50 servants to run the place.  Construction ended in 1914 – just in time for World War One.

<The Conservatory as it is today, by JOHN VETTERLI>

<The approach to Casa Loma’s stables and gardens, 1908>  By 1933, the city had seized Casa Loma for approximately $30,000 Mr. Pellatt owed in back taxes. He would die almost penniless, less than six years later in the home he shared with his former chauffeur. He and his wife, Lady Mary Pellatt (first Chief Commissioner of the Girl Guides of Canada), had managed to live in the castle for just one decade.

<The OAK ROOM, most decorated room in the house, 2018, photo by DENNIS JARVIS>  These days CASA LOMA is a museum, landmark & special events venue, open to the public year ‘round. Operated by the City of TORONTO, the castle and stables remain one of our city’s most popular tourist attractions.  HENRY PELLATT’s name lives on.  Also, several well-to-do neighbourhoods have grown up around the castle.  It’s become quite the prestige address.

Subway stop – DUPONT, and then walk northwest uphill, or ST. CLAIR subway stop, and then streetcar #512 westbound to Spadina Road, and walk south.