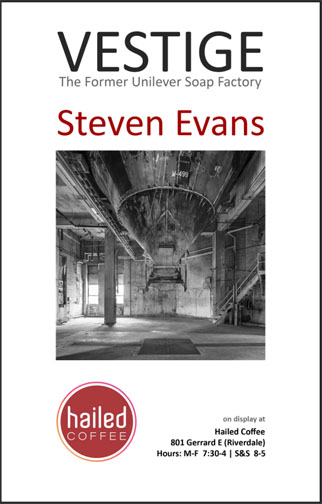 STEVEN EVANS tours one of TORONTO’s few remaining mid-century industrial sites. The abandoned machinery that once manufactured products as ordinary as soap, stand still and silent like forsaken ancient totems. They remind us of the persistence of the past and the ephemerality of the present.

The water’s rising
but we’re not drowning yet.
When we’re drowning
we’ll do something.
When we’re on our roofs.
When we’re deciding between saving
the cute baby or the smart baby.
When there aren’t enough helicopters
or news crews to circle
over everyone. When sharks
are in the streets. When people
are dying. When people
with wine cellars
are dying. We’ll build dams
and dikes, put stilts
on our V-8s and golf courses,
cut down anyone
who cuts down a tree,
paint our Jesuses
green, we’ll grow wings, we’ll go
to the moon. Soon.

BOB HICOK is the author of nine collections of poetry, including “Hold”, out in October from Copper Canyon Press. 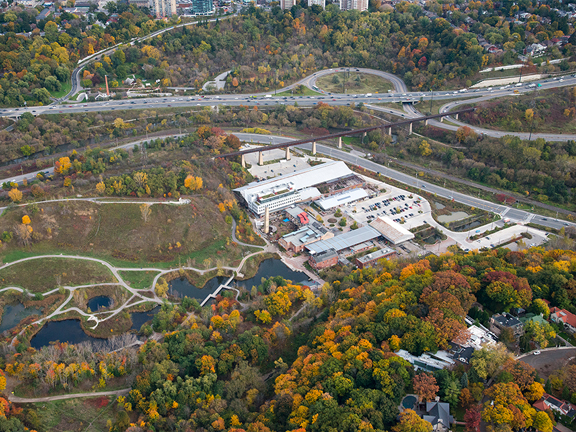 <PHOTO – the Don Valley Brick Works in 1891; City of Toronto Archives>  Recorded as both Nechenquakekonk and Wonscotonach in Algonquin language, the DON was part of an ancient Indigenous trail network connecting Lake Ontario to the upper great lakes, It was prized by the Wendat, Haudenosaunee and Anishnaabek Confederacies as a seasonal, resource-rich terrain.  The Valley became a major industrial site, producing the bricks needed for a rapidly growing TORONTO.

GETTING THERE:  shuttle bus, 7 days a week, every half hour, from BROADVIEW subway station;  TTC’s 28A Davisville bus offers half-hourly service on Saturdays from 7:30am–6pm and Sundays from 8am–6pm.  http://ebw.evergreen.ca/visit/getting-here 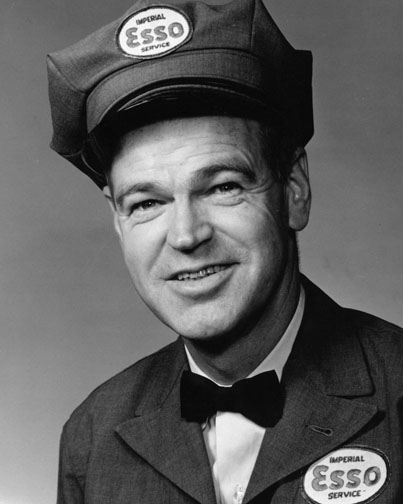 On Saturday nights in the 1950’s and 60’s, ‘Hockey Night in Canada’ (HNIC) was on the air, and MURRAY WESTGATE, wearing a service station hat, did all the commercial breaks for ESSO. He reached the age of 100 this past April, and died on Monday at Sunnybrook Health Science Centre.  “As a kid watching HNIC, I really did believe he had his own Esso station,” said PAUL PATSKOU, hockey historian and Canada’s top video archivist of the Maple Leafs and NHL. “If he was on HNIC, he had to be real. And I believe it’s true that people from out of town drove around looking for Murray’s station in TORONTO . . . “I had no idea he was an actor (nominated for a Genie, winner of an ACTRA) until years later.”

<The East York logo – Leaside Life>  EAST YORK was once Canada’s only borough, but in 1998 it was amalgamated by Mike Harris and his Progressive Conservative government into the “megacity” of TORONTO. It’s kept its personality however, with some high-rise, blocks of bungalows and commercial strips that look as if they came from a STEPHEN SHORE picture book. 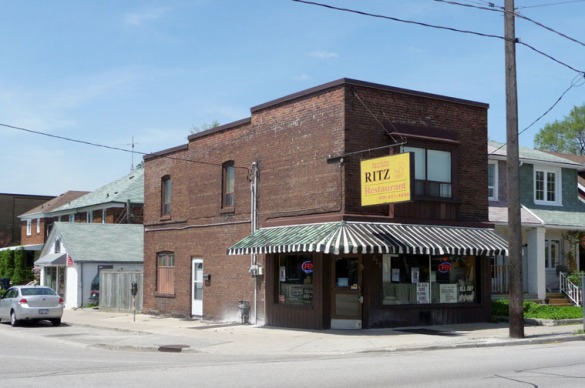 The restoration was made possible by The W. Garfield Weston Foundation & the Government of Ontario. It’s part of the Museum’s ‘Welcome Project’ and immediately became popular with the public.

The stained glass windows were originally installed in 1933.  Upcoming plans for the ROM – a performance terrace, a new plaza, and additional landscape design elements.

You don’t want to mess with one of these. Two friends, traveling home from a restaurant north of their cottage, wrote “fortunately we saw the moose way in the distance being chased by a dog. It ran a long way on the road, then turned around and ran back past us, and then finally into the bush.  Worse still – we were in the red Prius!  Talk about waving a flag at a bull!” – BRYAN BLENKIN (driver) ALAN ROWE (photographer) 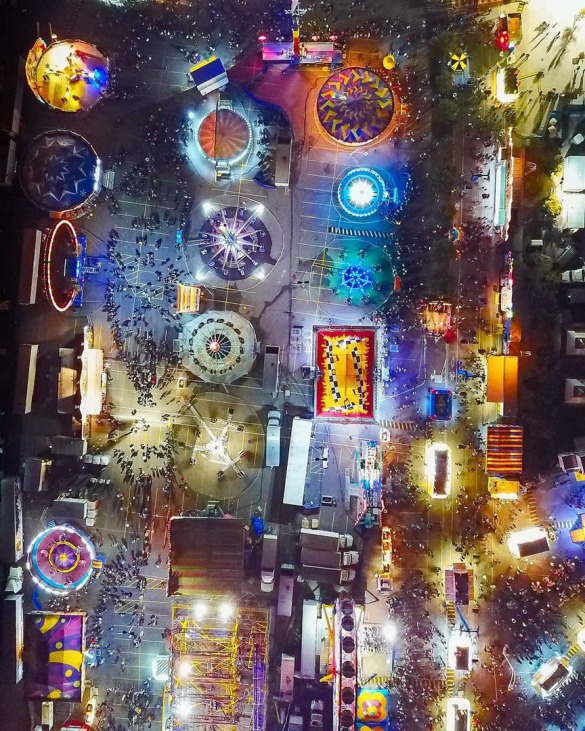 Looking down at the Midway as the CNE celebrates its 140th year. The Exhibition traditionally marks the end of summer for Torontonians.
Credits – @snappedby cam . . . #letsgototheex . . . #streetsoftoronto 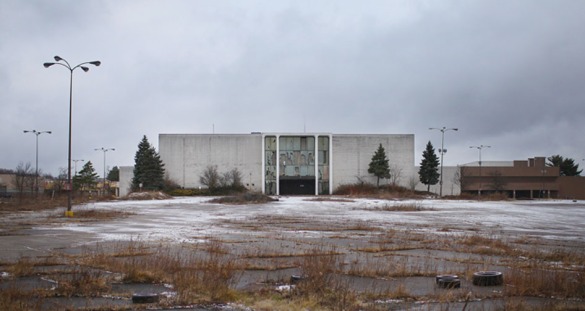 <Boarded up Zellers store at the mall, AMHERST, Nova Scotia, photo – Ross Winter>  KATE FOLK, writing in the New York Times magazine believes “no other category offers the spectacle of modern ruin on such a horrifying scale: the scars of familiar logos on storefronts, the desiccated planters, the sheer volume of emptiness and waste . . . a once-beloved edifice that, in the space of a few years has become so worthless no one even cares enough to tear it down.”

<Bayside Mall, formerly the Eaton Centre, SARNIA, Ontario, photo – seanmarshall.ca>  Ms.Folk unwinds late at night “by watching tours of dead and dying shopping malls on YouTube.” She says “there are two basic types. The first explores a mall that is still open, though the end is evidently nigh – the retail equivalent of a sinking ship. Then there are the tours of malls that have already been shut down and abandoned, often for years – deep sea footage from within the moldering shipwreck.”

But fortunately there are exceptions – many shopping malls are going strong. YORKDALE in TORONTO is thriving – more these days than ever before. Part of its success no doubt comes from a longtime connection to the city’s subway network.

The WEST EDMONTON MALL, North America’s largest, boasts over 800 stores and services, 9 attractions, 2 hotels and over 100 places to eat and drink. There’s parking for 20,000 vehicles, and it’s visited by 32-million annually. 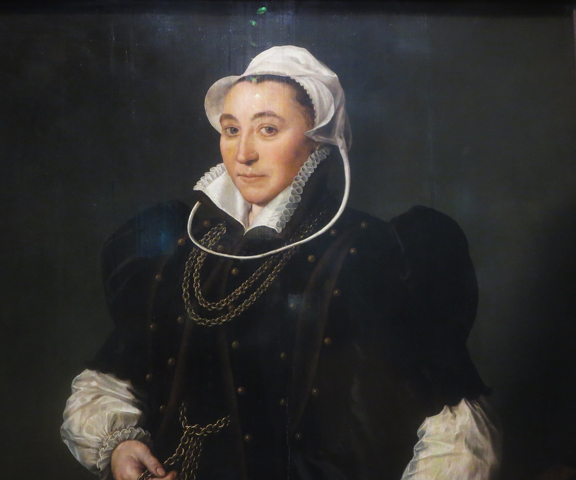