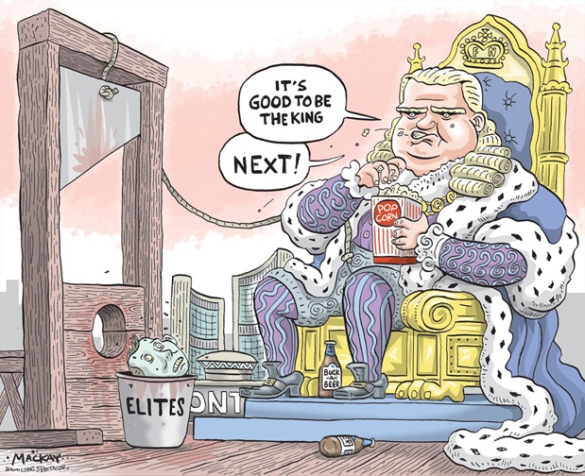 <“IT’S GOOD TO BE THE KING . . . NEXT!”, editorial cartoon by GRAEME MACKAY, Hamilton Spectator>  Premier DOUG FORD plans to slash nearly half of all TORONTO city council seats before the municipal election on October 22nd. That would mean going from 47 councillors to about 25. Ward boundaries would then match federal and provincial ridings.  Ford is also cancelling regional chair elections in Peel, Niagara and York regions.  A dozen councillors support Mr. Ford’s plan. 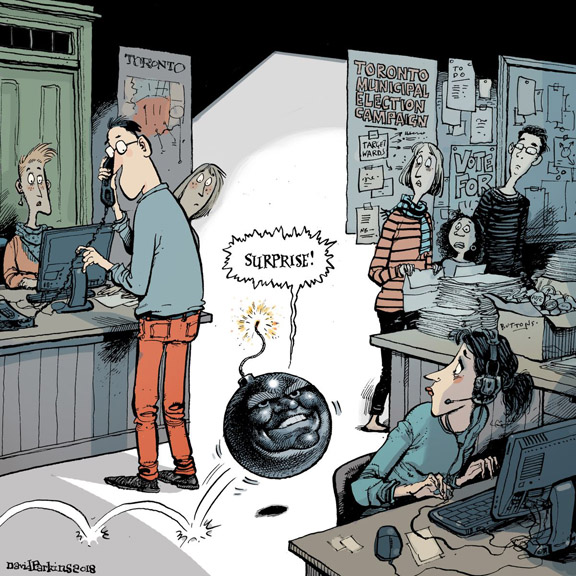 <‘SURPRISE!’, editorial cartoon by DAVID PARKINS, Globe and Mail, July 30th/2018>  CANADA’s federal government says it will do whatever it can to protect TORONTO from the “vindictive and destructive” actions taken by Doug Ford and his administration. ADAM VAUGHAN , Liberal Member of Parliament and Parliamentary Secretary for Urban Affairs, says Ford is plunging TORONTO into chaos at a time when it needs stability the most.  Vaughan said the proposal is “reckless, irresponsible” and tosses TORONTO into a political storm when it needs leadership on critical files such as asylum seekers, gangs & guns, transit & housing. Vaughan went on to say Ford is taking these actions because “he doesn’t like Toronto” and accused him of “breaking” the city.  <PHOTO – Adam Vaughan/The Canadian Press>