<QUOTE – Christine Mountsteven/TORONTO>. Two downtowners, about 2500 miles (4,000 kilometres) apart, set out to find living space they could afford. Both succeeded – one of them 24-years ago, and the other in 2018. Each is thrilled to be living in the centre of it all.

Now 83, CHRISTINE MOUNTSTEVEN, former teacher and member of a co-op, landed a two-bedroom suite not far from the Art Gallery of Ontario in 1994. Her modest rent allows for a high quality of llfe thanks to pensions and subsidized housing. Discovering something like this today would be like finding a needle in the proverbial haystack. <PHOTO – Vince Talotta, Toronto Star>

An Affordable Housing Plan for Ontario has just been released. It’s a partnership between the Ontario Non-Profit Housing Association & the Co-operative Housing Federation and makes these recommendations: the creation of 69,000 new affordable rental homes over 10 years; 30,000 units for those with addictions & mental health issues; financial support of $10,000 for each of the existing 260,000 social housing units over 10 years; and rent supplements or income support for 311,000 households.

PHOTO ABOVE by Kevin Van Paassen/Globe and Mail – TORONTO’s Regent Park (shown in 2005) is an example of what can be done. Total redevelopment has been happening there for about 10 years – mixing market-value with affordable social housing, and building a state-of-the-art aquatic centre, a high-tech playground, a running track, ice rink, theatre centre, soccer fields, a new community centre, outdoor art, a supermarket, bank, coffee shops and parkland.  The Regent Park Project has brought forth a new downtown community. Funded by the city, province and federal governments, redevelopment there continues.

ADRIAN CARATOWSA’s struggle to find his way through the labyrinth of SAN FRANCISCO’s 2018 lottery system – after years of trying, has come out a winner. He now has an apartment he loves, near the Financial District, in the thick of it, and says “To be able to look down on this chaos and not hear anything, and then to open the window . . . I love the sound. This is so downtown.” 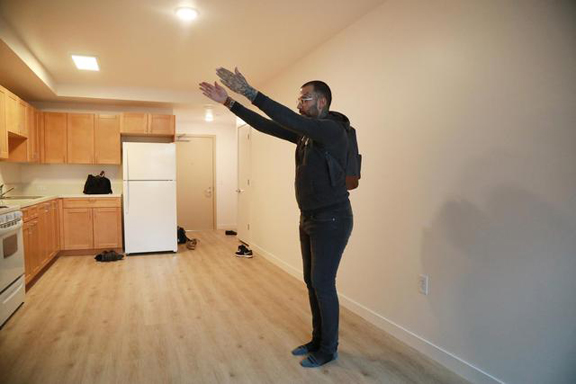 Before managing to get his apartment, Mr. Caratowsa, 31. admitted he would walk the streets of the Financial District yearning to live there, “seeing people in suits, going to work, they’d have their coffee in hand – to me it was like being a little girl who wants to be a princess and she wears her mom’s high heels . . . “That was me in the Financial District.”

What’s it like searching for affordable housing & entering the SAN FRANCISCO housing lottery? Find out by reading the New York Times’ in-depth article ‘These 95 Apartments Promised Affordable Rent in SAN FRANCISCO. Then 6,580 People Applied.’ – and you’ll find out.