Once this was the largest distillery in the world, but now it’s a major TORONTO tourist attraction and a National Historic Site. The Gooderham and Worts Distillery was founded in 1832 and provided 7,600,000 litres of whisky to a thirsty world. Most of it was exported onto the world market, and a good deal of it went south to the US. 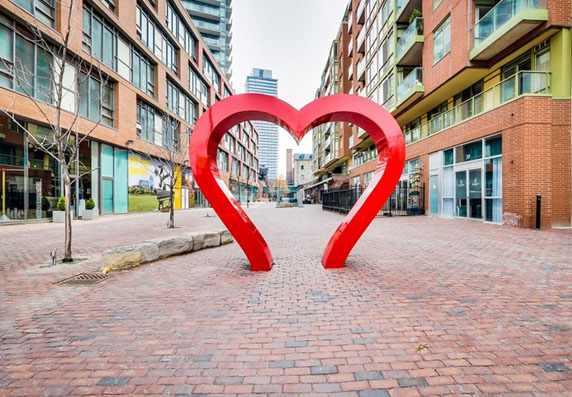 In 2003 the District opened to the public, with a variety of small boutiques, art galleries, restaurants, coffee houses, a micro brewery – but no chain stores.

Several condominium buildings have been built in the area – making the District financially viable.  About 900 movies and television shows have been filmed here – including ‘Chicago’ and ‘A Christmas Story’.  <The Corkin painting and photography gallery is on Tank House Lane>

<One of three theatres inside the Young Centre for Performing Arts, home to the Soulpepper Theatre Company & George Brown College’s theatre school>