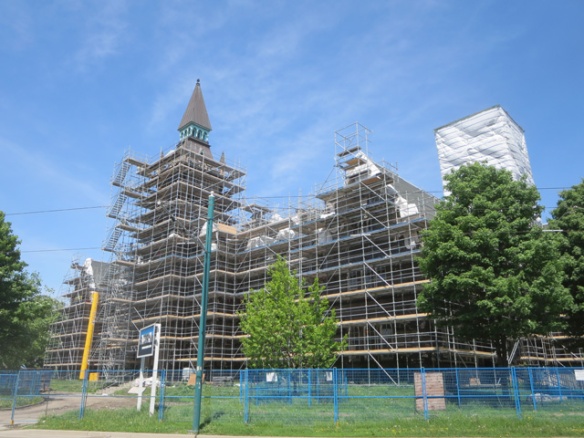 <One Spadina Crescent as it was two years ago>

One Spadina Crescent, with its Gothic towers and long history, is getting yet another lease on life after a career as Knox College, World War I barracks, a penicillin factory, an eye bank, a veterans hospital, a library, pathology lab and several departments within the University of Toronto.  AMELIA EARHART worked here as a nurse’s aide until she contracted influenza, and there’s been at least one murder within the building. It was nearly demolished in the 1960’s to make way for the Spadina Expressway.

Daniels Faculty of Architecture, Landscape and Design is now rehabilitating the historic structure and adding a modern extension on the back.  The extension will contain lecture rooms, research facilities, a green roof testing lab, design studios, a fabrication lab and the Global Cities Institute.