<The Gladstone’s tower rises above the railway underpass in Parkdale – City of Toronto Archives>  The Gladstone was built opposite the long-gone Parkdale Railroad Station. In the early days it was a luxurious hostelry, serving railway passengers and visitors to the nearby Canadian National Exhibition.  The owner, Susanna Robinson, a widow, lived there with her thirteen children.  In later years, the Gladstone became a bit of a flophouse, until it was rescued by the Tippin and Zeidler families about 15 years ago.

The Gladstone is now managed by Christina Zeidler, whose goal has been making the hotel fit into the surrounding community.  To that end, hotel employees found new homes for longterm residents, especially those who were elderly and most at risk.  Then all 37 rooms were re-designed by TORONTO artists, and a year ‘round program of art, special events and music was put into place.  The Gladstone is an important part of our city’s cultural landscape. 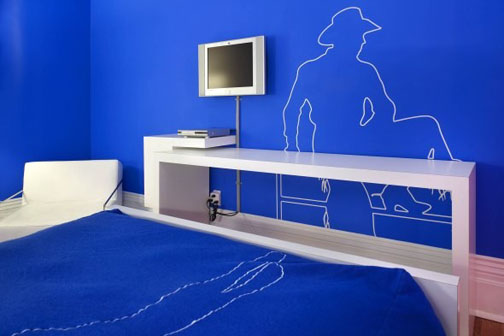