The three green cubes at the foot of Sumach Street, TORONTO landmarks since 1996, are up for sale. Unfortunately they’re sitting on a prime piece of land and could go for over $3-million. The home was last sold in 2002 for $265,000 when the neighbourhood was pretty much an undeveloped wasteland. But all of this is changing rapidly.  Hopes are high that they can somehow be saved.  <PHOTO – Eduardo Lima/Metro News>

Bonnie and Clyde, High Park Zoo’s most famous rodents, are now mom and dad to three bundles of joy. Born on February 23, the pups have been kept indoors because “they’re South American and they’re babies, so they need to stay inside,” said city spokesperson Megan Price. <PHOTO – Jason McCullough>

BETTY KENNEDY, once one of Canada’s best-known television and radio personalities, died at 91. For 27 years she hosted ‘The Betty Kennedy Show’ on TORONTO’s CFRB. And for 33 years she was the only female panelist on CBC television’s “Front Page Challenge”. Mrs. Kennedy-Burton was also a senator for seven months – retiring, as required, in January/2001 upon reaching the mandatory age.  <PHOTO – Jonathan Hayward/Canadian Press>

TOURISM TORONTO has launched a new campaign – ‘The Views Are Different Here’ – promoting our city as Canada’s Downtown.
Andrew Weir, CEO of Tourism Toronto says T.O. is the most-visited destination in Canada. While other cities have vibrant downtowns “international visitors will start in TORONTO … because that’s where the planes fly. People want Canada, and they want the cities of Canada.”  Check out Tourism Toronto’s website and see their new video – http://www.seetorontonow.com/#sm.00003d3687bc0ctvw3r19grtn5c68

A grand piece of TORONTO architecture – the Dominion Public Building – has been sold for $275.1-million. It was purchased by Larco Investments, a Vancouver-based company that also owns Ottawa’s Chateau Laurier Hotel.  The Dominion Public building, 1 Front Street West, was the federal government’s first customs house, where imports and exports were administered and inspected. The building’s first of two phases was built from 1929 to 1931. In 1934 and 1935 the west pavilion was added.

GILBERT BAKER, the “Betsy Ross” of the Rainbow Flag died on Friday, March 31. Although the original underwent a few revisions, the design has endured for over 30 years as the international symbol of the LGBTQ community.  The first Rainbow Flag appeared at San Francisco Pride on June 25, 1978. Mr. Baker said “I knew instantly when I saw the reaction that it was going to be something. I didn’t know what or how or – but I knew.” He refused to apply for a trademark for his creation, saying it was his life’s work and his gift to the world. Mr. Baker was 65. 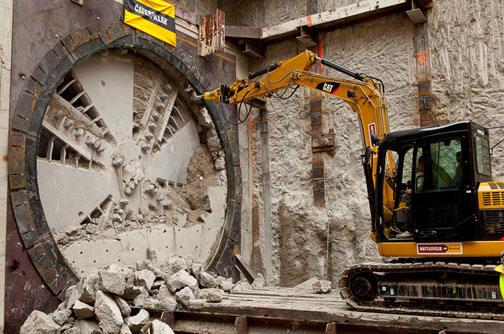 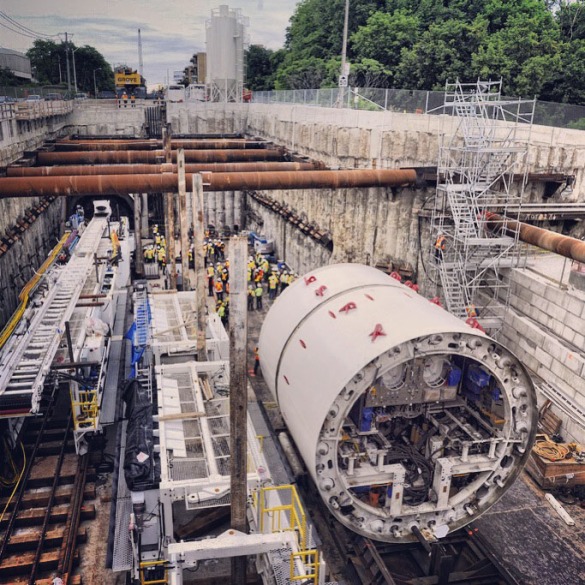 <Hard Rock Cafe, Yonge-Dundas Square>  The Hard Rock Cafe is about to become a Shoppers Drug Mart. That seems to have put at least one city councillor on alert. MIKE LAYTON doesn’t want the chains to take over, and we’re rapidly headed in that direction. Pure and simple, with sky-high rents Mom and Pop can’t afford storefront property any longer. 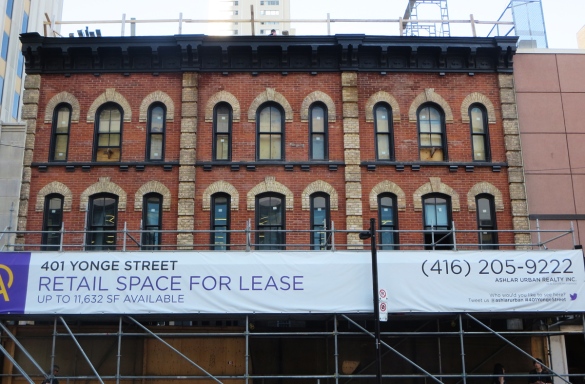 <A Rexall Drug Store occupies the ground floor under these Victorian-era flats – it pays the rent.>  Mike Layton wants “to create an environment that’s more of an incubator for small-scale stores.” The downtown councillor is impressed by a SAN FRANCISCO policy called Formula Retail Use, in which chain stores face additional regulations – a more rigorous approval process, controls on matching the neighbourhood’s character and prohibitions in some areas. TORONTO’s Yonge Street can certainly use some of that right now.

<Yonge, south of Gerrard, will soon be redeveloped> 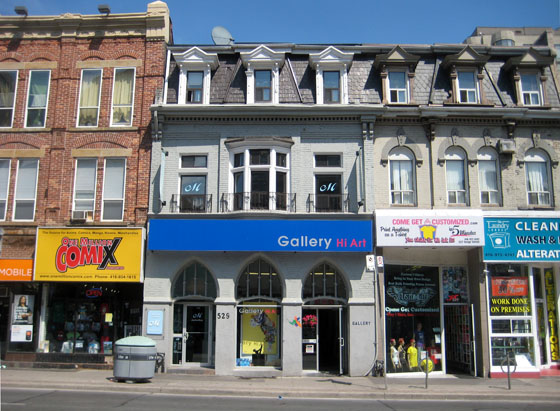 Mike Layton: “You can’t just have the same formula for every development. This isn’t saying no to chain stores, but there needs to be some local consideration.” 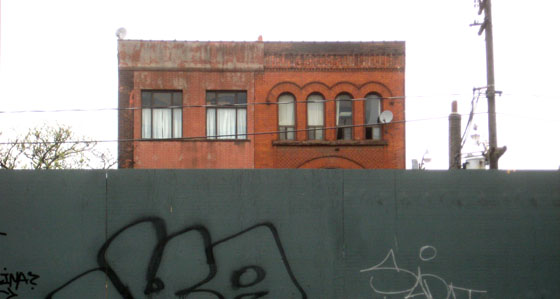 More than 50 buildings, 20 parking garages, 6 subway stations, 8 major hotels, Union Station, the CBC Broadcasting Centre, Hockey Hall of Fame, the Stock Exchange, Hudson’s Bay department store, Canada’s six banks, Roy Thomson Hall, the Rogers Centre, the CN Tower, City Hall, the Air Canada Centre and 1200 shops and services are all accessible via PATH.  About 5,000 people work in the tunnels themselves, and a few hundred thousand in the office towers above. 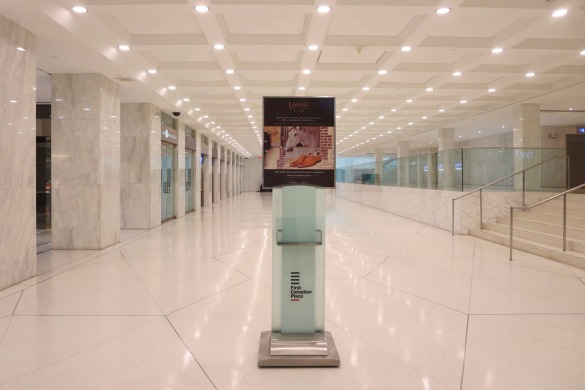 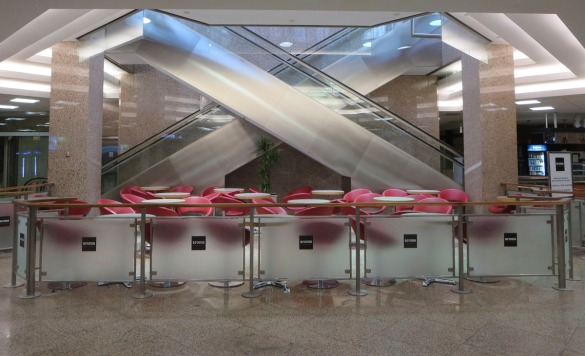 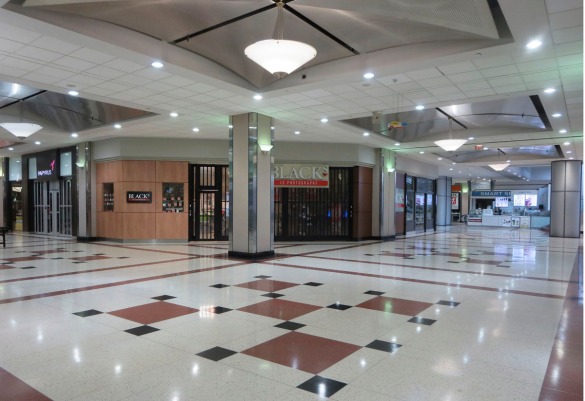 NOBU Hospitality, the luxury restaurant and hotel chain founded by actor Robert De Niro, famous Japanese chef Nobu Matsuhisa and Hollywood producer Meir Teper, will soon be coming to TORONTO. Two 49-storey bronze towers will be built above the current Pilkington Glass Factory on Mercer Street, and will include a hotel, NOBU, retail space and an outdoor Zen garden. The glass factory’s facade will be part of the development.

Sidewalk superintendents gathered to watch DON, one of two tunnel-boring machines (TBMs), hoisted above ground and taken apart. It had been digging underground for nearly four years, helping to build the Crosstown LRT’s north tunnel.  The 400-tonne monster was disassembled along Eglinton Avenue. A second TBM, named HUMBER (after the river), surfaced a few days later. The TBM’s bored 16-20 metres below ground, around the clock, with a crew of six operators each.

German Chancellor ANGELA MERKEL spent some time at the White House and left many of us wondering just what she was thinking as the day progressed. Ms. Merkel has a very expressive face, and news photographers captured a variety of candid nuances from pleasure to bewilderment.

Charles Edward Anderson CHUCK BERRY, one of the founding fathers of rock ‘n roll, has died at the age of 90. He grew up in Missouri during the time of racial segregation; rose to become a worldwide star; was jailed for robbery at the age of 17; lived an outrageous life; became famous for his ‘duck walk’ as well as Johnny B. Goode, Roll Over Beethoven and Sweet Little Sixteen.  “He lit up our teenage years, and blew life into our dreams of being musicians and performers,” – Mick Jagger. 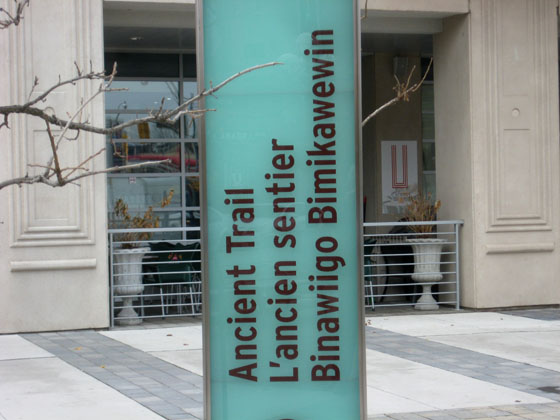 FRANK STOLLERY PARKETTE has become a tiny urban beauty spot.  The park is built on an old Aboriginal trail, which wound along the Escarpment, one of TORONTO’s most distinctive geographical features.  13,500 years ago, this was the shoreline of Lake Iroquois, forerunner of today’s much smaller Lake Ontario.  Photos and maps are posted; you can read a short history lesson, and there’s a parkette-side restaurant too. 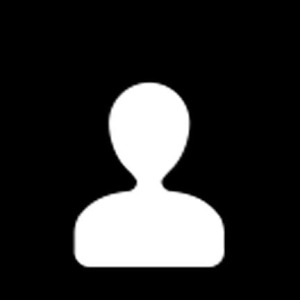 RONNY JAQUES (1910-2008) was a British photographer whose family moved from England to Canada, then on to New York City and TORONTO, where he opened a studio at 24 Grenville Street. He stayed here until 1941 when he closed the studio and moved back to New York. During the 40’s, 50’s and 60’s his photographic specialties were fashion, travel, food and lifetstyle. His work is everywhere, but he’s no longer with us.

Jaques was in TORONTO long enough to record some splendid images of our city between 1939 and 1951.  <Photo above – Kensington Market>

A large number of these are in Canada’s National Library and Archives.  <Photo above – Trading Floor, the old Toronto Stock Market.  The building still exists on Bay Street.>

You can scan through the Archives’ vast collections at this address – http://www.bac-lac.gc.ca 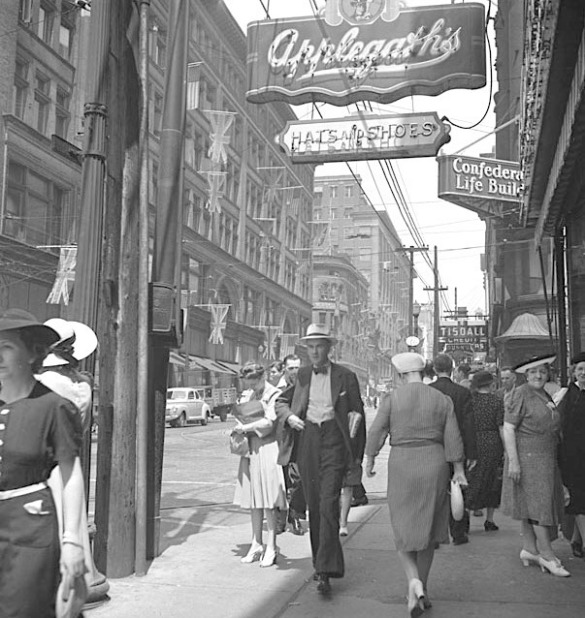