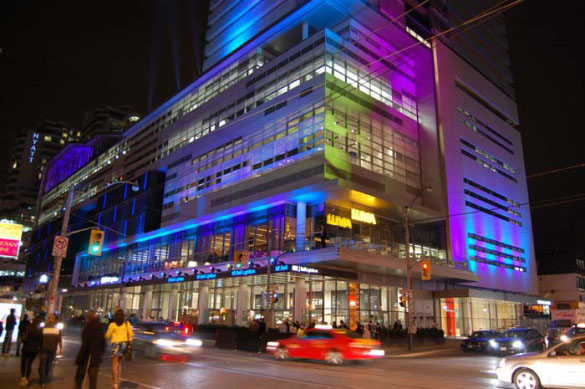 TIFF’s Bell Lightbox, which hosts TORONTO’s Cinematheque and 5 theatres, specializes in the classics, arthouse movies, retrospectives, and international features. All auditoriums are equipped with premium Kinoton film projection technology.  Everything is run from touch screens, and the projectionist can program all 5 cinemas from one control desk.  <PHOTO ABOVE – Biz Bash; BELOW – Toronto International Film Festival> 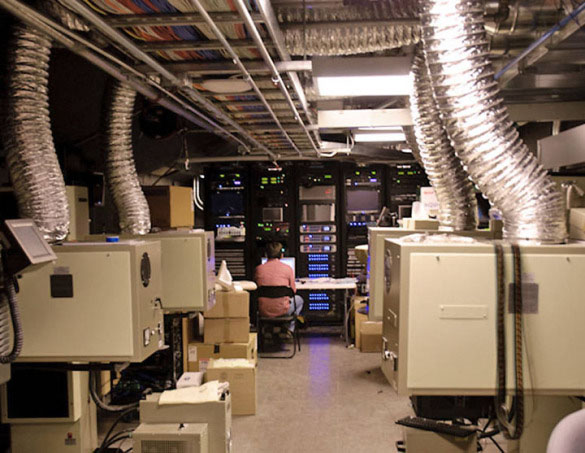 DEZEEN MAGAZINE – This enclosed bridge with a geometric black and white facade connects a hotel to the Metro Toronto Convention Centre, helping visitors pass between the two even in the depths of winter. For more photos and the complete story go to http://www.dezeen.com/?p=842056 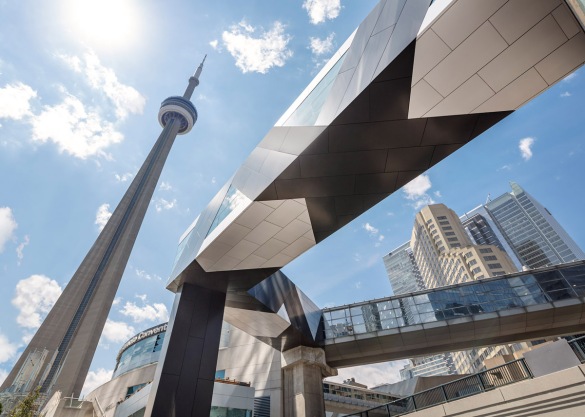 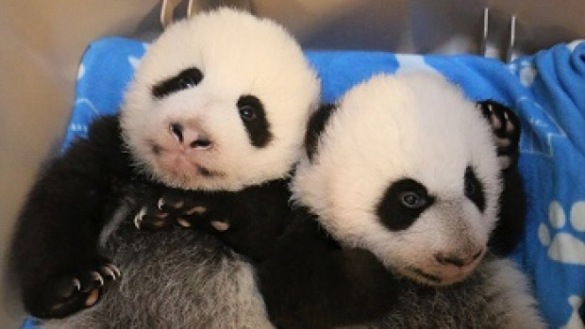 These little charmers are growing up very quickly thanks partly to their expert keeper, Chen Min, at TORONTO ZOO.  They’re the first panda cubs ever born in Canada, and keeping them happy, healthy and well fed is a 24/7 job. 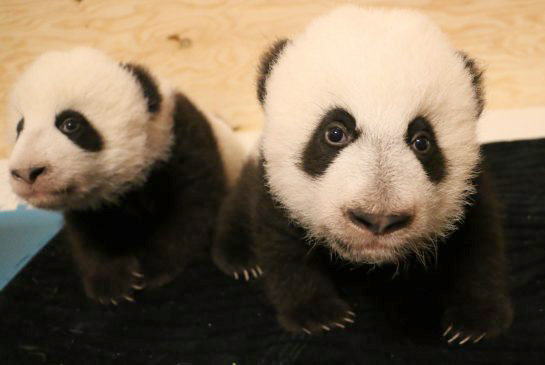 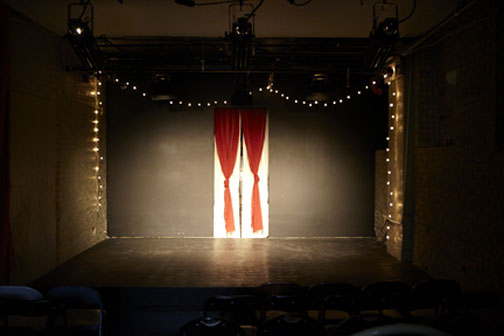 Open a theatre, and they will come.  TORONTO writers, artists, producers and actors are finding new audiences in small neighbourhood theatres built inside a variety of structures. A former barber shop, a convenience store, a cellar, a former library, as well as some new ready-made venues are now playing an important role in our city’s indie theatre scene. 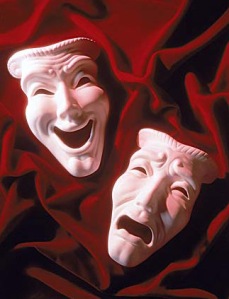 ANDREW SHAVER moved his Sidemark Theatrical Grocery from Montreal to TORONTO. In an interview with the Globe & Mail he said: “There’s just a wealth of creativity and talent in this city – and there aren’t enough spaces to accommodate them.  Coming to TORONTO, living in the East End, it feels like living in Montreal in some ways – you’re still off of the centre.  I get inspired by that sort of uphill climb.” 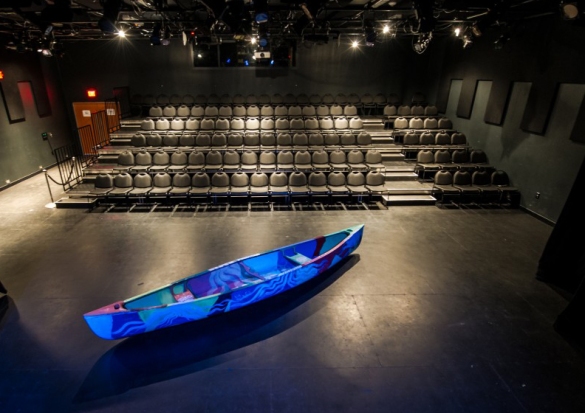 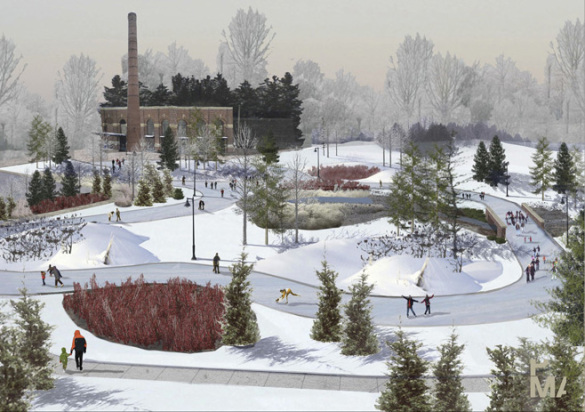 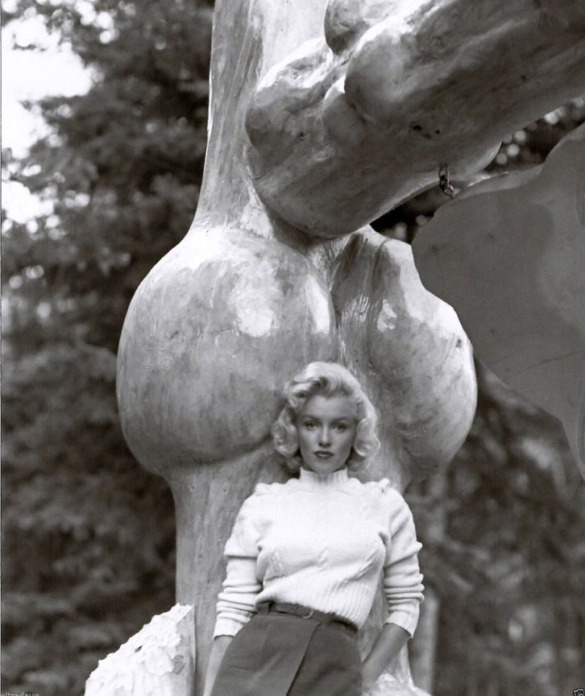 “Miss Monroe, would you mind standing in front of ‘that thing’ over there, so I can take your picture?”
“Not at all mister.  That would be delightful.”  And so Miss Monroe stood in front of ‘the thing’, and the stranger took her picture. 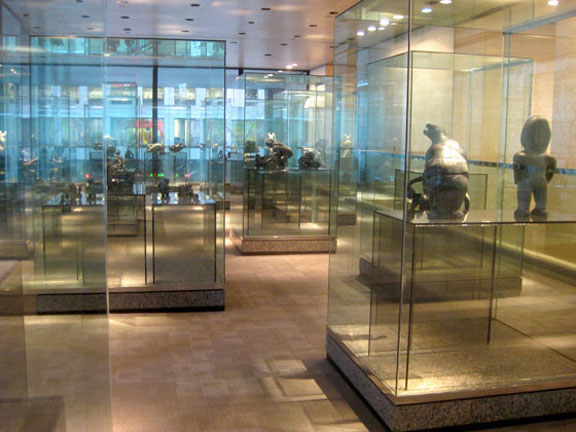 To mark Canada’s Centennial in 1967, the Toronto-Dominion Bank assembled a quality collection of prints, sculptures, drawings and ceramics from across the Canadian Arctic. 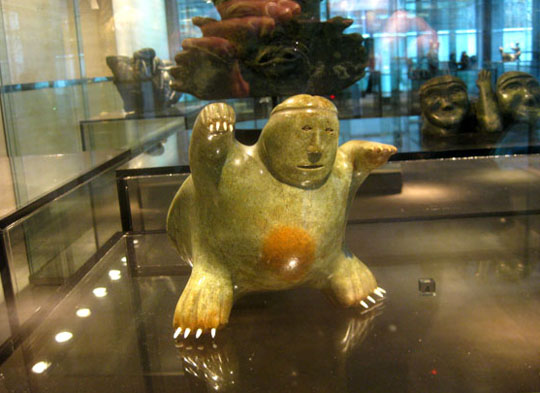 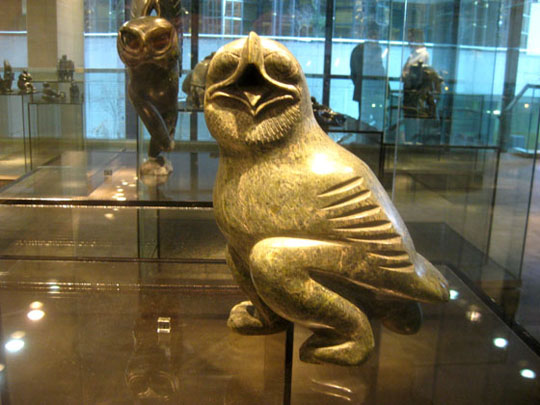 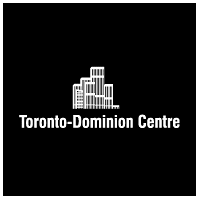 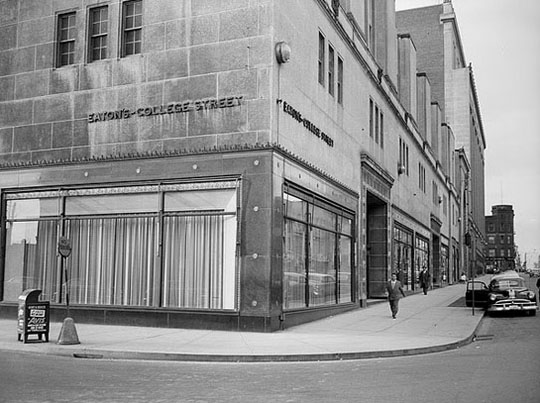 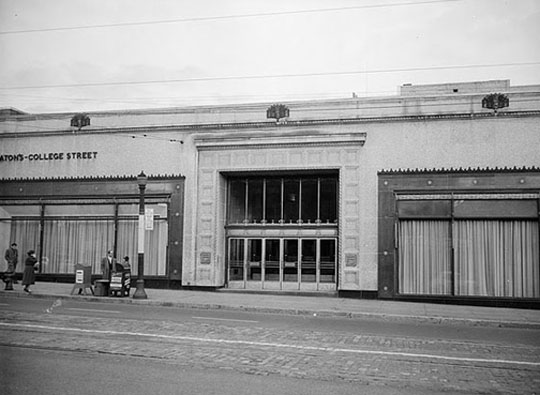 Sundays were pretty bleak in ‘TORONTO the Good‘.  In 1956 when these photos were taken, the T. Eaton Company on College Street drew the drapes on Saturday night, and they remained closed until Monday morning.  <PHOTOS – City of Toronto Archives> 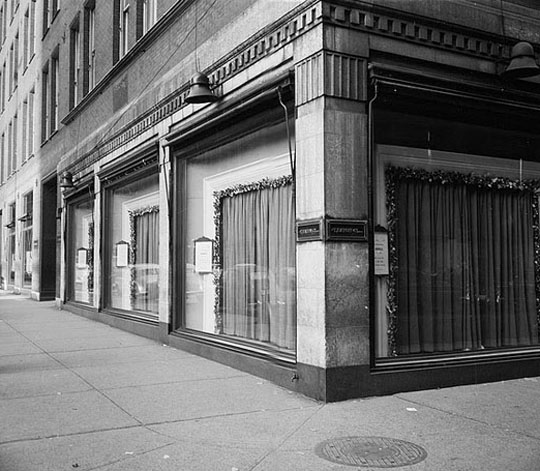 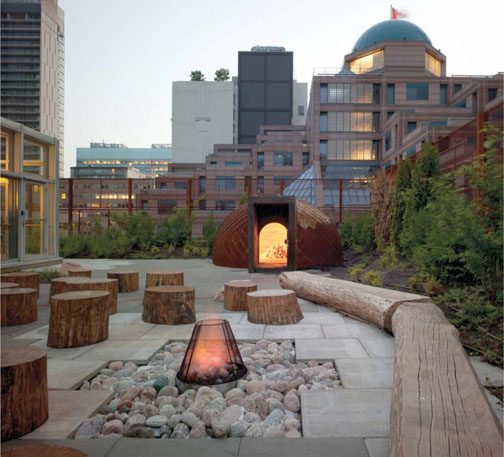 From the outside, it’s just another 1980’s-era office building.  But inside, Levitt Goodman Architects have created a welcoming oasis for urban aboriginals in the heart of TORONTO.  From its lush rooftop garden on down, the Native Child and Family Services project, 30 College Street, combines family, mental health and social services within a friendly natural environment. 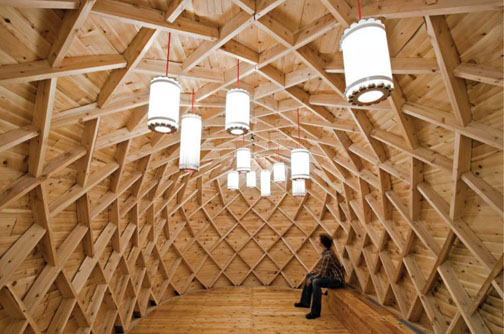 There are teaching hills; plantings of sweet grass, tobacco, corn and squash; an aboriginal artists studio; and space for assemblies of all kinds.  <PHOTOS – Ben Rahn/A-Frame Inc. & Jesse Colin Jackson> 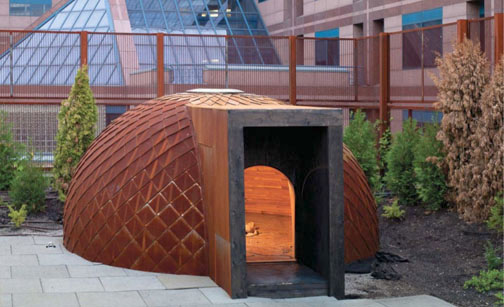 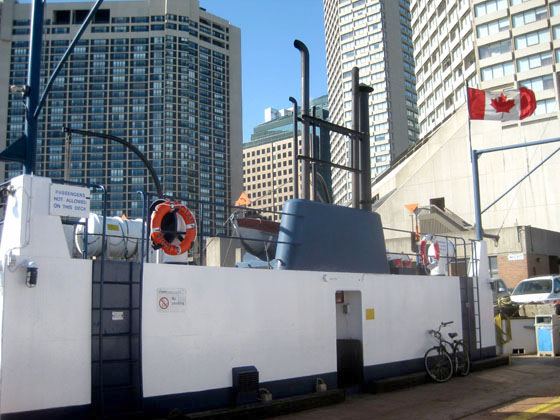 Pack a lunch, a thermos and some warm mitts.  Suit up the kids, and head down to UNION station.  Transfer to the 509 or 510 streetcar, get tickets for the car ferry – and you’re off to Ward’s Island.

TORONTO Islands, a vast network of parks, canals, a boardwalk, superb views of the city skyline and Lake Ontario, and a collection of 250 winterized cottages . . . only 15 minutes from the foot of Yonge Street.  Exit the boat at Ward’s, or stay aboard for the return journey.  Winter and summer schedules differ. 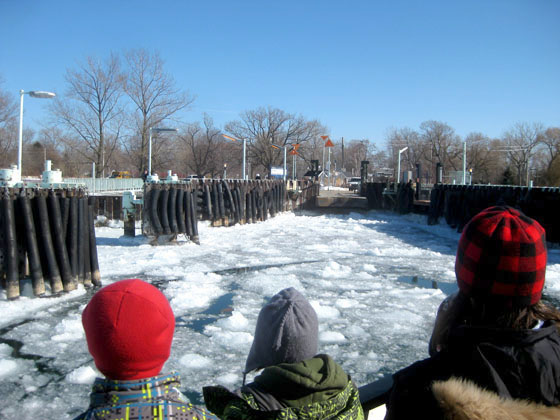 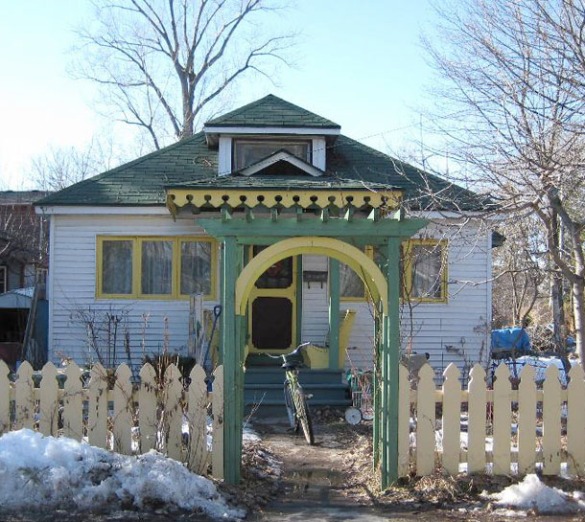 PHOTOS ABOVE & BELOW – Ward’s Island cottages, from http://mzodell.blogspot.com 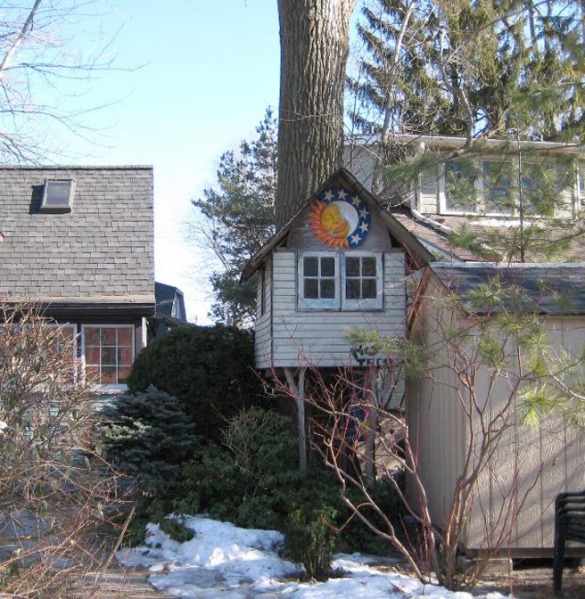