<LAWREN STEWART HARRIS, 1885-1970>   LAWREN HARRIS, Canadian iconic painter and member of the Group of Seven, is making his debut in Los Angeles at the Hammer Museum, partly thanks to actor, comedian and art collector STEVE MARTIN. Reporter Mike Boehm of the Los Angeles Times writes “Martin is using his star power to couch for a little-known talent he thinks the public should know and love – a Canadian landscape painter who died in 1970, famed in his homeland but all but unheard of in the United States.”

“By anointing Martin as curator, the Hammer joins a number of museums that have bestowed curatorial laurels on pop-culture celebrities and reaped the attendant publicity. It also reopens a long-running art world debate over whether people who collect a given artist’s work — as Martin does with Harris — should have a hand in curating nonprofit museum exhibitions that have the potential to increase the value of their own art holdings.” 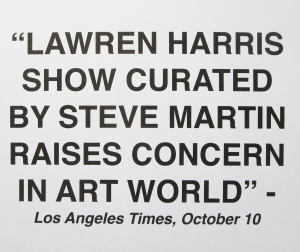