We’ve had a few, but not many. English Canadian television series that go on for 14 years are rare in this country. With the announcement this week that MTV had canned ‘De Grassi’, we thought the series would end in July.  But not so fast.  The very next day, the FAMILY CHANNEL announced it would screen a new series – ‘De Grassi – Next Class’ – of 20 half-hour episodes with cast members from the most recent incarnation. 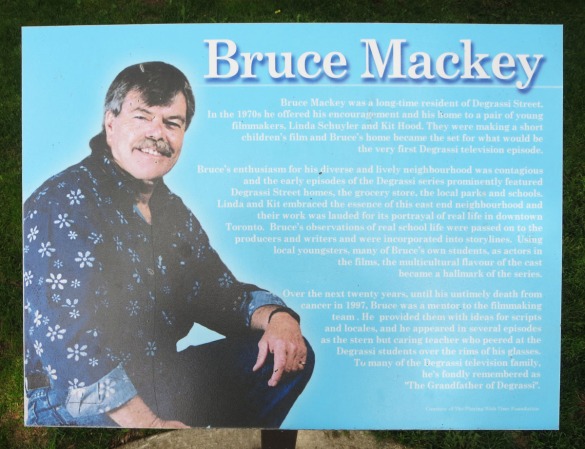 In 1979 BRUCE MACKEY, a teacher and long-time resident of De Grassi Street, offered his home to a pair of young filmmakers Linda Schuyler and Kit Hood, to make a short children’s film – “Ida Makes a Movie”, about garbage collection on her street. That turned out to be the very first De Grassi television episode shown on the CBC. It found an audience, and other episodes followed, centred around De Grassi houses, the grocery store, the local parks and schools.  Over the next 20 years, until his death in 1997, Bruce was a mentor to the filmmaking team. Being a teacher, he could pass on his observations of real school life to the producers and writers. Using local youngsters as actors, many of them Bruce’s own students, the multicultural flavour of the cast became a hallmark of the series.

‘De Grassi’ was followed by ‘De Grassi Junior High’, ‘De Grassi High’, ‘Schools Out’ and beyond. The series won two International Emmys, nine Gemini Awards, two Prix Jeunesse and countless other honours. The street itself became famous as the series was shown around the world. Many traveled great distances to visit this ordinary little street in TORONTO’s Riverside neighbourhood.

‘De Grassi – Next Class’, like its predecessors, will tackle homphobia, racism, substance abuse, body issues and dating in the social media age.  The new series is produced by DHX Media’s Epitome Pictures, in association with the Family Channel and Netflix.  Netflix will run the show worldwide starting next year.  Netflix Canada will get the series after an initial run on Family.