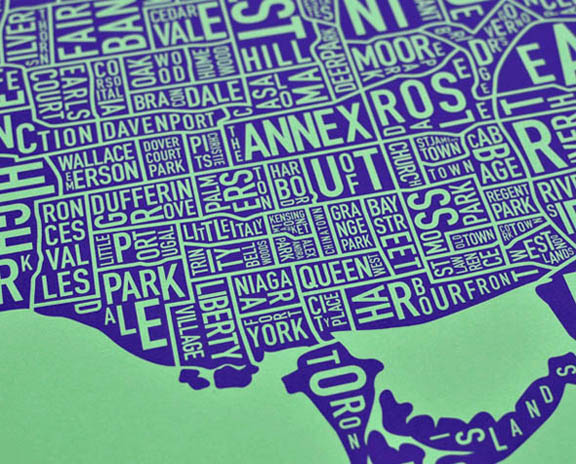 Established several years ago by the City of TORONTO, TAPto has roughly 90 tour guides who know the city’s neighbourhoods well. Tours last anywhere from 1 to 3 hours, and by filling in a simple one-page booking sheet visitors can pinpoint their interests and availability. Once that’s done, a tour guide will be assigned.
To book a TORONTO Greeter – http://www1.toronto.ca/wps/portal/contentonly?vgnextoid=e14d3a2f287c1410VgnVCM10000071d60f89RCRD 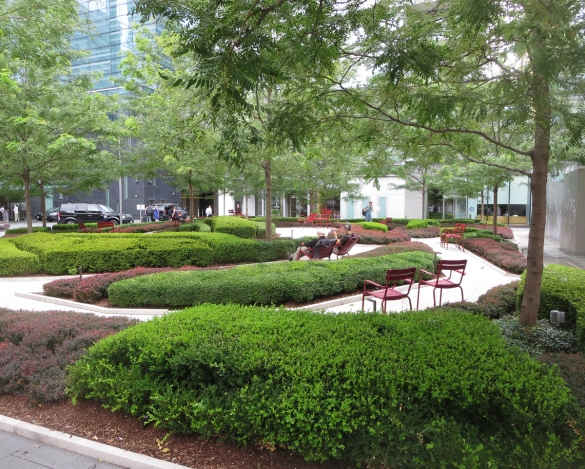 TORONTO Greeters are volunteers who love their city and enjoy showing visitors its parks, architecture, history, neighbourhoods, transit system and the arts.  Tour groups are small – usually 1 or 2 people, sometimes a few more. A package of maps (bicycle trails, transit network, parks & gardens, a city map) are given to each person on the tour.  Best of all, it’s free.  No tipping.  It’s a great deal and operates all year around. 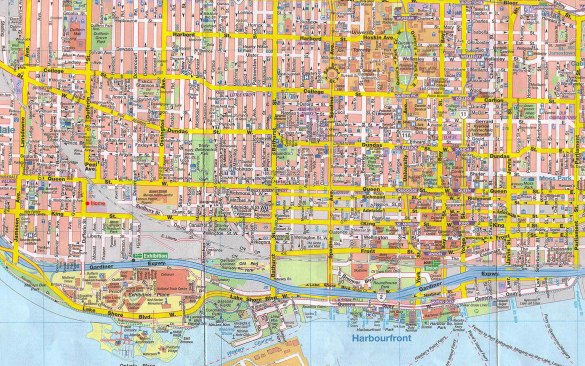 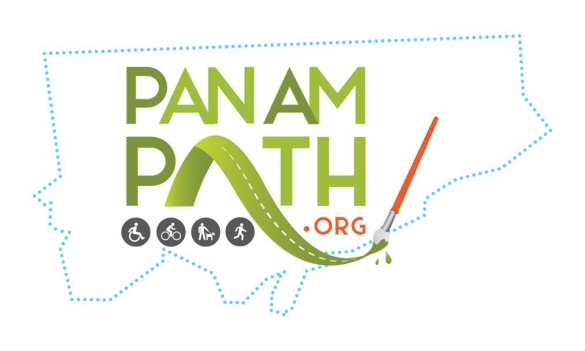 TORONTO/2015, the Pan American & Parapan Games in July, will leave behind several government-funded legacy projects. Among them – the Cherry Street YMCA, two state-of-the-art aquatic centres, housing for George Brown College students, the new Don West neighbourhood and park, as well as the 84-kilometre (50-mile-long) Pan Am Path, connecting the far eastern and western suburbs with the inner city. 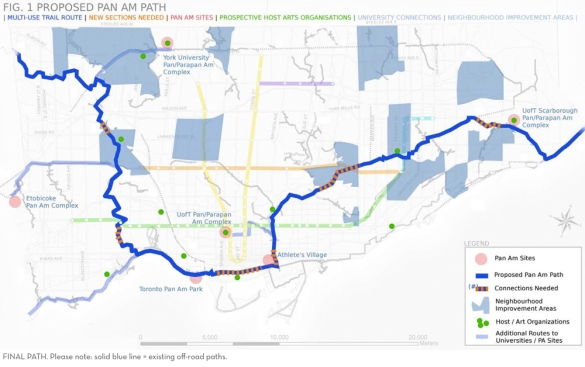 The Pan Am Path connects existing trails from the Claireville Reservoir, to the Humber Valley, Exhibition Place, the downtown waterfront to the Distillery District, West Don neighbourhood, up the Don River to Taylor-Massey Creek. The Path also branches off east, through the Gatineau Hydro Corridor, through Scarborough, Highland Creek, into Pickering, and back to the Lake Ontario shoreline. 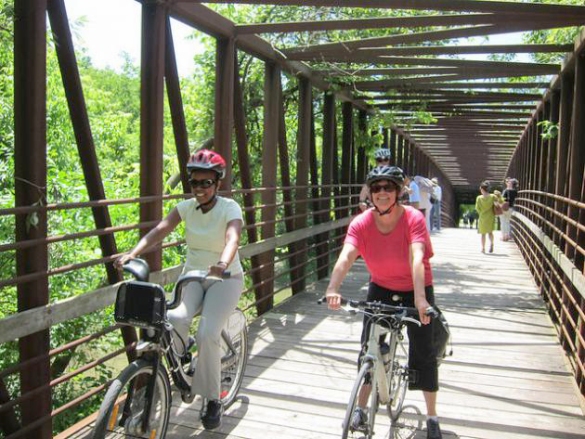 <PHOTO ABOVE – Friends of the Pan Am Path> 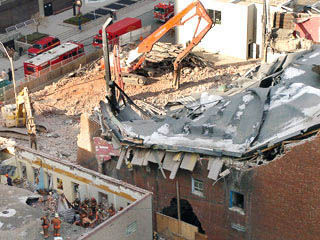 The UPTOWN, one of TORONTO’s finest vaudeville houses opened in 1920 and was demolished for a condominium development in 2003 <PHOTO ABOVE>. It met an unpleasant end, collapsing inward while being demolished, killing one young man and wounding fourteen others. 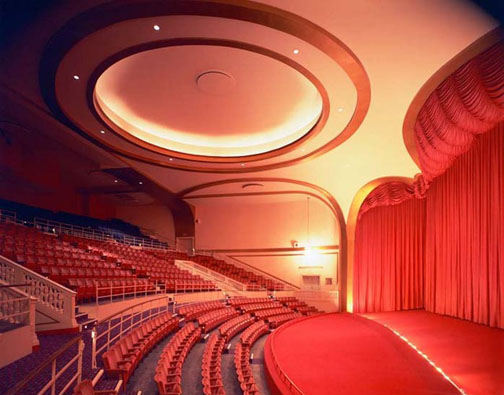 A cinema with 3,000 seats in one auditorium, the Uptown was eventually converted into one of North America’s first multiplexes in 1969. The Uptown 1, 2 and 3 played major Hollywood releases, and the Backstage 1 and 2 regularly screened art films. 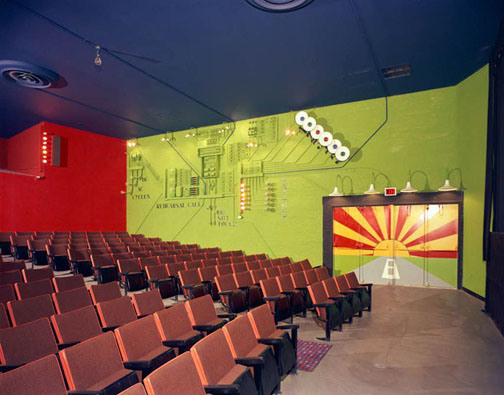 In 2001, new regulations required wheelchair access to all theatres.  The Uptown’s owners refused to lay out the required $700,000, and sold the building to developers who knocked it down.  During demolition, a large section of the theatre collapsed after a vital steel support beam on a roof truss was cut.  The Uptown fell in on itself, taking an adjacent language school with it. 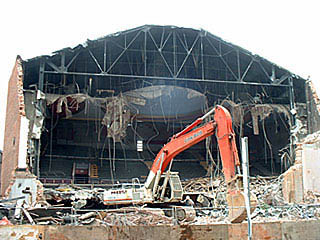 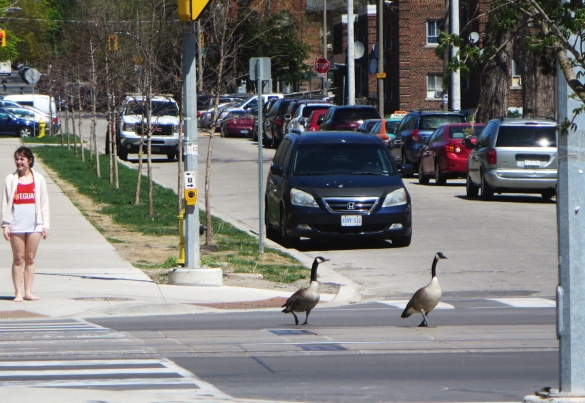 We know they’re pests, make a mess, and go where they’re not wanted . . . but the strikingly beautiful Canada Goose is very much at home in TORONTO. They especially like camping out in our parks.  This dignified duo was crossing four lanes of traffic on Dundas Street East, unfortunately against the traffic light. Fortunately they survived. 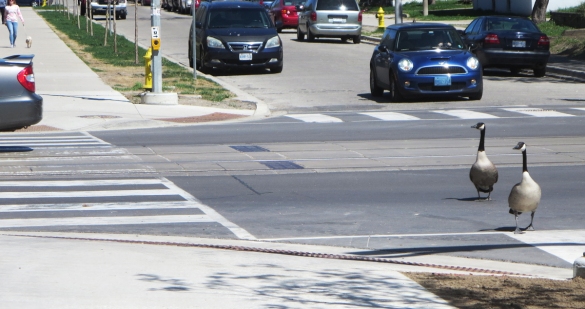 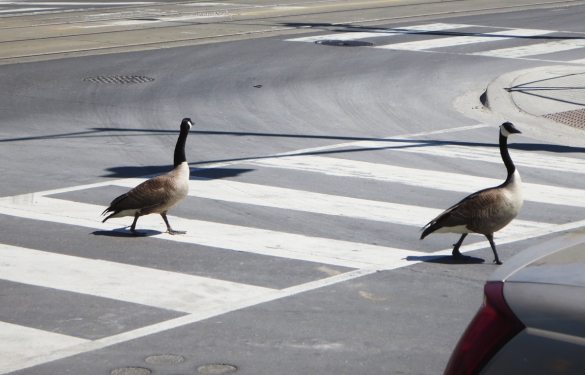 Although TORONTO today is in rapid change mode, there’s still plenty of old ‘funkytown’ around.  A friend from CHICAGO comes here annually for TIFF, and says she loves our parks and picket-fence neighbourhoods, non-linear streetscapes, quirky architecture, robust nightlife, and colourful populace.  Below, a few photos from the City of Toronto Archives taken about 35 years ago – before densification and sprawl really took hold.  <PHOTOS – 1) Building Roy Thomson Hall next to a vast parking lot; 2) on the Lakeshore Boulevard motel strip; 3) the police cars were yellow; 4) subway cars were red; 5) we had trolley buses;  6) the SkyDome (now the Rogers Centre) was under construction> 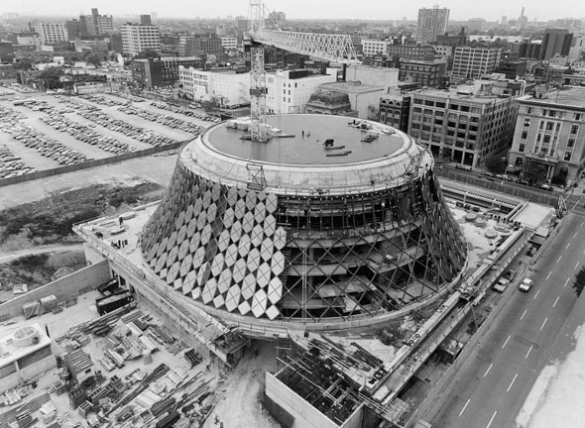 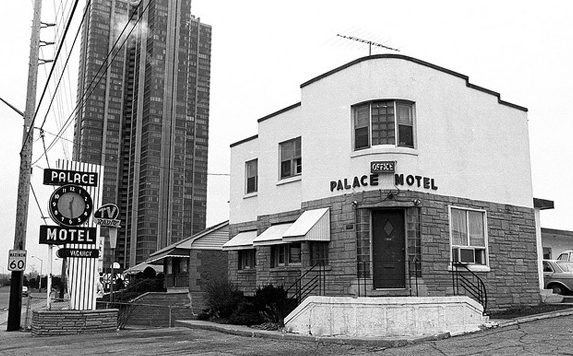 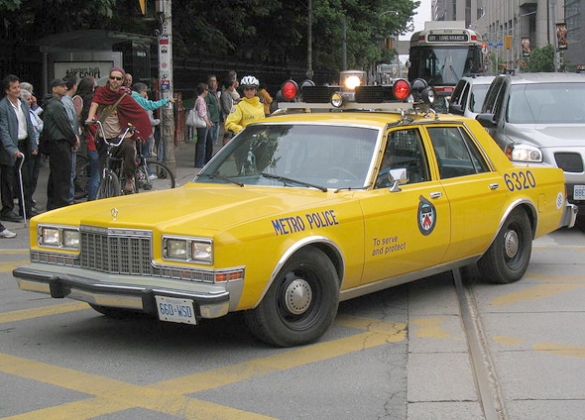 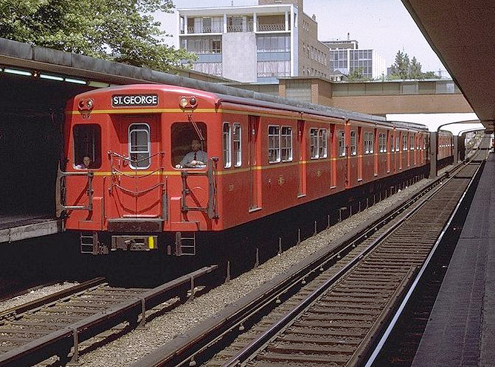 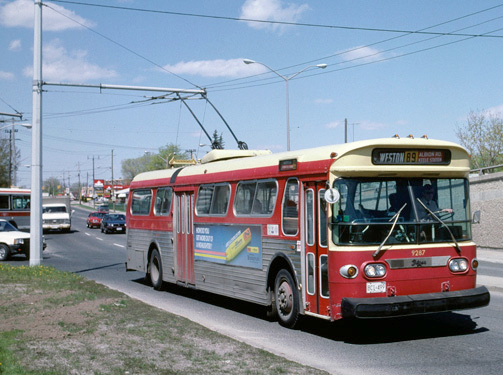 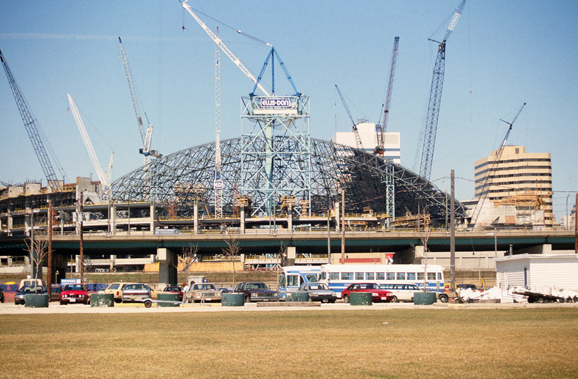 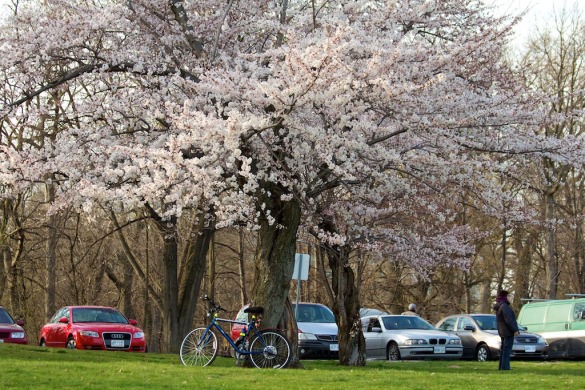 All roads lead to High Park for our city’s annual springtime cherry blossom festival. This city and sakura go back quite some time. In 1959, Tokyo gifted 2,000 Somei Yoshino Sakura trees to the city in appreciation for TORONTO having accepted relocated Japanese-Canadians following World War II.  In 1984 a grove of Japanese cherry trees were donated by Yoriki and Midori Iwasaki to “the people of TORONTO.” From the Consulate-General of Japan in 2001, another 34 Yoshino ‘Akebono’ and Kwanzan ‘Fuugenzo’ Sakura trees found their way to High Park, followed by 16 more Yoshino Sakuras.  Sometime between now and May 9 will probably be the peak viewing season. The blossoms will be in their prime for about a week. The Sakura’s progress can be monitored at this website – http://www.highparknaturecentre.com/high-park-cherry-blossom-watch/ 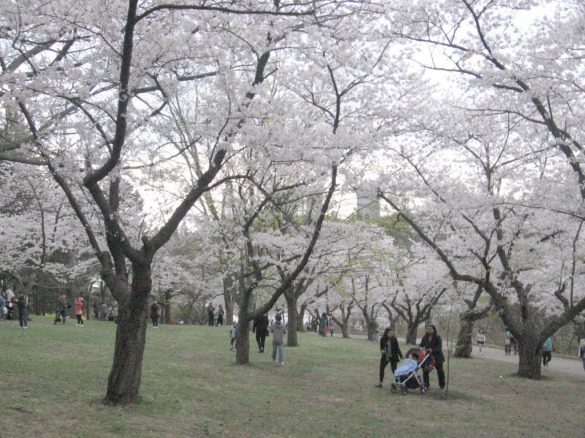 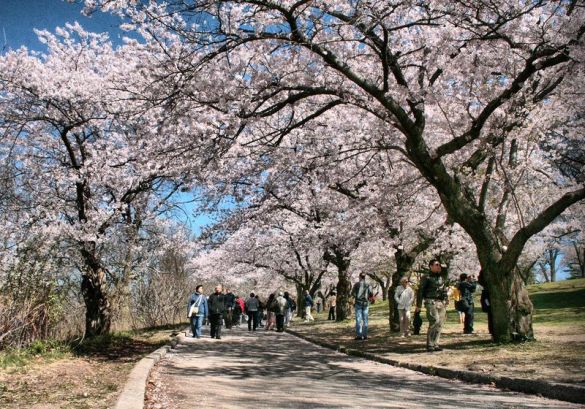 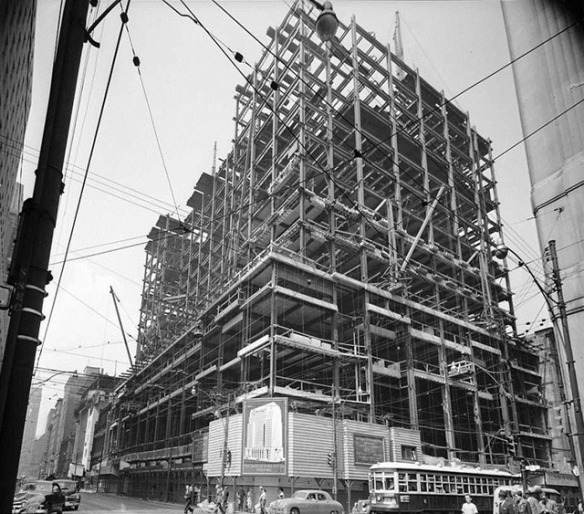 Construction for the 24-storey Bank of Nova Scotia headquarters (Scotiabank these days) began in the late 1920’s, was interrupted by the Great Depression, and finally finished in 1951. <PHOTO ABOVE – ca1949>  Its facade depicts Canada’s flora, fauna, industry, historic events, aboriginal motifs and mythic figures. 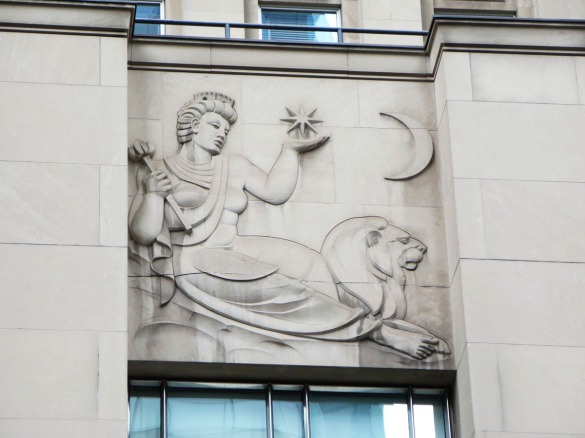 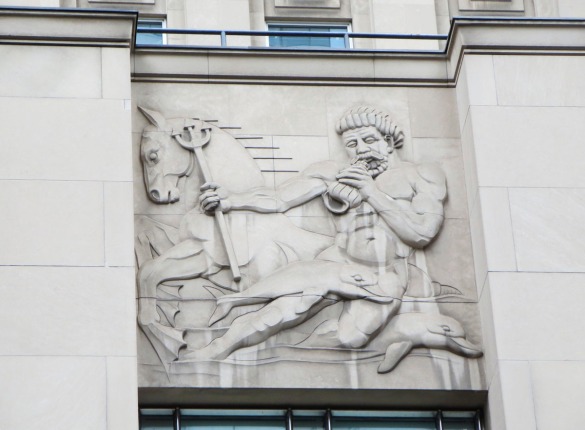 The original architect, John M. Lyle, also designed Union Station, the Royal Alexandra Theatre and the Runnymede Library. Unfortunately he died before the project was completed, but many of his Art Deco plans were incorporated into the building by his successors, Mathers and Haldenby. 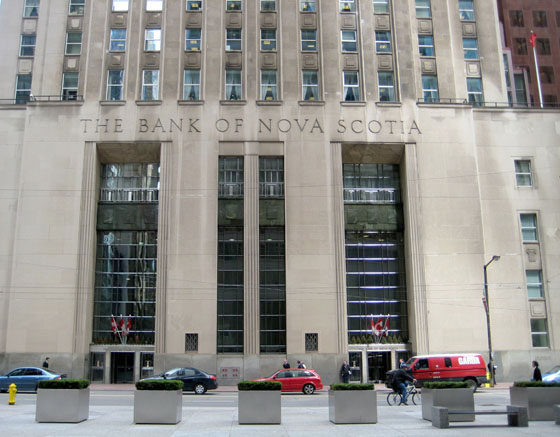 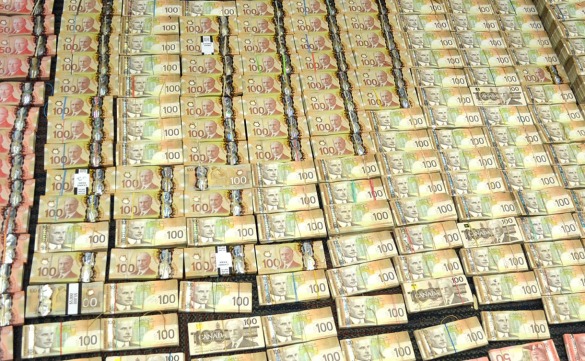 Our American neighbours – via CNBC – looked over the fence and took note: “While sales slowed in all of Dubai, Hong Kong, London, Los Angeles, Miami, New York, Paris, San Francisco and Sydney, sales grew in Canada’s commercial capital of TORONTO by a hearty 37 percent.  “2014 was the Toronto market’s second best year on record,” said Justine Deluce of Chestnut Park Real Estate in the Christie’s ‘Luxury Defined’ report, out on Thursday.
“If there had been more inventory (in Toronto), the record would easily have been shattered,” she added.  Christie’s said that an “extremely low” supply of houses in TORONTO had pushed prices to $1-2 million for “relatively average” houses and $2-4 million for larger homes or those in the “most desirable neighborhoods”. 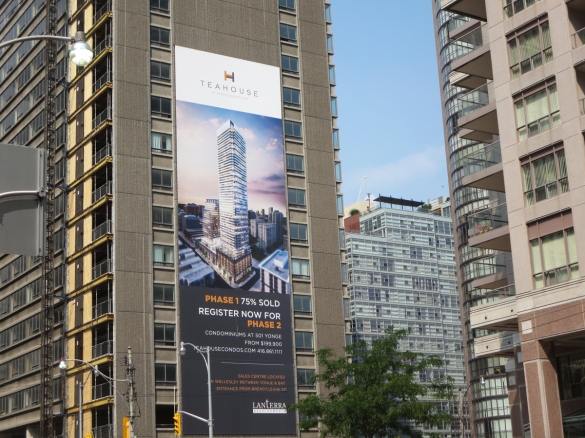