PETER ANDREW LUSZTYK – http://www.peterandrew.ca – rents Cessnas to fly over and take spectacular pictures of freeway interchanges.  “It’s not until you look at them from the air that you see there is this engineered, moving system that’s really creative and quite beautiful,” says Peter, who lives and works in TORONTO.  <PHOTOS BELOW – 1) Toronto;  2) Montreal>

The most intricate exchanges aren’t usually found in the largest cities.  NEW YORK CITY comes up short; the ramps aren’t long enough.  The best ones appear to be in TEXAS, his next project,  Peter says that state is full of great freeway designs, and between HOUSTON, DALLAS and SAN ANTONIO his hands will be full for days.  “TEXAS has the greatest concentration of these interchanges that I’ve found (on Google),” he says.  <PHOTOS BELOW – 3) Detroit;  4) Albany;  5) Phoenix  6) Chicago> 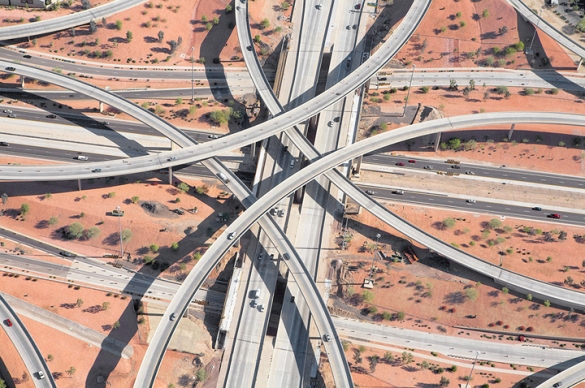