It’s 119 years old, sits on a hemmed-in site downtown, has played host to anybody who’s anybody in the entertainment world, and needs some fixing up and expansion.  The federal government has come to the rescue, with an $8 million “kick start” announced in yesterday’s federal budget.  The original stage will remain as-is, sightlines will be improved, and new seating installed.  The building will expand into a rear laneway, shared by the Elgin and Winter Garden theatres, and the forthcoming Massey Tower.

PETER HARRIS paints the city in the overnight hours.  “My paintings use the local environment of my daily life to examine the modern landscape as the majority of Canadians experience it – within an urban setting.  With over 80% of Canadians now living in cities, our relationship to, and idea about what constitutes an authentic Canadian landscape are continually evolving.”

Many downtown churches have had a windfall lately from selling property and air rights to developers.  There’s money in the bank for much needed upgrades.  A classy glass canopy now connects St. James’ Cathedral to a renovated yellow-brick Church House at the rear.

In the wee hours of Thursday morning, TORONTO TRANSIT COMMISSION engineers were testing the first of 204 new streetcars, scheduled to go into service in 2014.  The new cars are much longer than today’s fleet, measuring about 30 metres (approximately 90 feet) from end to end.  According to the TTC, all went well.  <PHOTOS – Toronto Transit Commission>  “Around 1:30 a.m., (my) fantasy became a reality.  At a red light at Dundas and Spadina, there it was: the gleaming, red and white test car, like a visitor from some strange and advanced cityscape, making its way south on Spadina’s dedicated tracks.  The 30-metre-long mini-train, capable of reaching speeds up to 70 km/h, moved slowly, almost cautiously, flanked on either end by two of its out-of-service ancesters, which functioned as bodyguards . . . A simple U-turn put the streetcar in our rearview mirror.  It sped off into the night, disappearing from sight, back into the future.” – an encounter with TORONTO’s new test streetcar on a late-night trial run, by Rob Duffy/The Grid 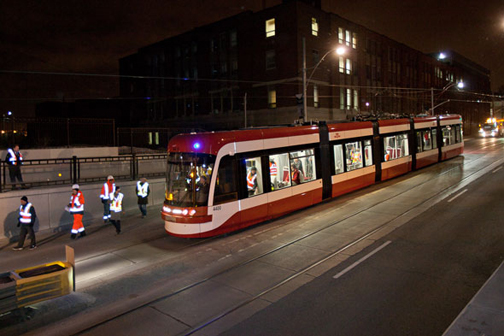 St. Michael’s Choir School, founded in 1937, is sending its famous boy’s choir to perform for newly-installed Pope Francis.  Some 190 students sang at Vatican City’s Basilica of Saint Peter on April 7 – as part of a mass conducted by the Archbishop of TORONTO, Thomas Cardinal Collins.  The appearance will mark the first Vatican performance for St. Michael’s Choir School in 16 years.  The school is located at 69 Bond Street.

On loan from the North Carolina Museum of Art, the PERUZZI ALTARPIECE will be one of 90 artifacts from 14th-century FLORENCE on exhibit at the Art Gallery of Ontario, March 16 – June 16/2013.  After 4 months in LOS ANGELES at the J. Paul Getty Museum, the show – “Revealing the Early Renaissance – Stories and Secrets in Florentine Art” – will make its only Canadian stop in TORONTO. 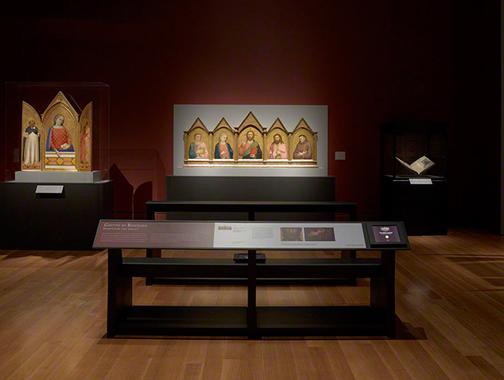