KING-SPADINA and KING-PARLIAMENT were once primary industrial hubs in TORONTO’s core.  In the 1980’s they both went into serious decline as industry moved out, first to suburbia, then overseas and to the US and Mexico.  Brick warehouses emptied, and property owners began demolishing them without regard to their heritage value.  Former mayor BARBARA HALL and her council knew they had to act.  The Kings Regeneration Planning Initiative was introduced, eliminating traditional land use restrictions and emphasizing the preservation of these wonderful old structures.  KING-SPADINA has since boomed with a cornucopia of commercial and light industrial businesses – new media, technology, fashion, architecture and entertainment.  In the last couple of years,  KING-PARLIAMENT has been heading in the same direction.  BELOW – KING-SPADINA, roughly from Bathurst in the west, to Simcoe in the east, south of Queen to Front Street . . . 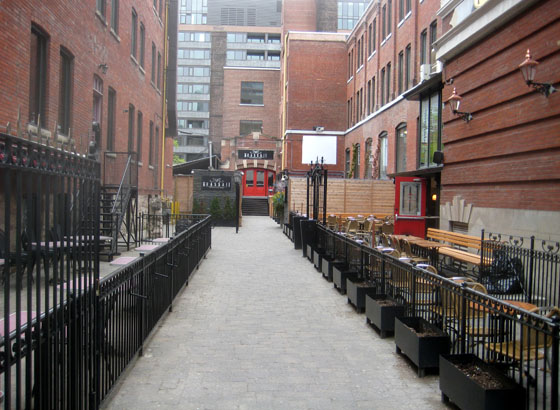 BELOW – KING-PARLIAMENT – from Jarvis in the west, to the Don Valley Parkway in the east, to the Gardiner in the south.